Does AMERCO (NASDAQ:UHAL) represent a good buying opportunity at the moment? Let’s briefly check the hedge fund interest towards the company. Hedge fund firms constantly search out bright intellectuals and highly-experienced employees and throw away millions of dollars on satellite photos and other research activities, so it is no wonder why they tend to generate millions in profits each year. It is also true that some hedge fund players fail inconceivably on some occasions, but net net their stock picks have been generating superior risk-adjusted returns on average over the years.

AMERCO (NASDAQ:UHAL) shareholders have witnessed a decrease in support from the world’s most elite money managers lately. Our calculations also showed that UHAL isn’t among the 30 most popular stocks among hedge funds.

According to most investors, hedge funds are seen as unimportant, outdated investment tools of years past. While there are greater than 8000 funds with their doors open today, We hone in on the masters of this club, about 750 funds. It is estimated that this group of investors handle the majority of the smart money’s total asset base, and by paying attention to their first-class investments, Insider Monkey has identified many investment strategies that have historically surpassed the broader indices. Insider Monkey’s flagship hedge fund strategy outstripped the S&P 500 index by nearly 5 percentage points per year since its inception in May 2014 through early November 2018. We were able to generate large returns even by identifying short candidates. Our portfolio of short stocks lost 27.5% since February 2017 (through March 12th) even though the market was up nearly 25% during the same period. We just shared a list of 6 short targets in our latest quarterly update and they are already down an average of 6% in less than a month.

At Q4’s end, a total of 7 of the hedge funds tracked by Insider Monkey were long this stock, a change of -13% from one quarter earlier. Below, you can check out the change in hedge fund sentiment towards UHAL over the last 14 quarters. With the smart money’s positions undergoing their usual ebb and flow, there exists a select group of noteworthy hedge fund managers who were upping their holdings considerably (or already accumulated large positions). 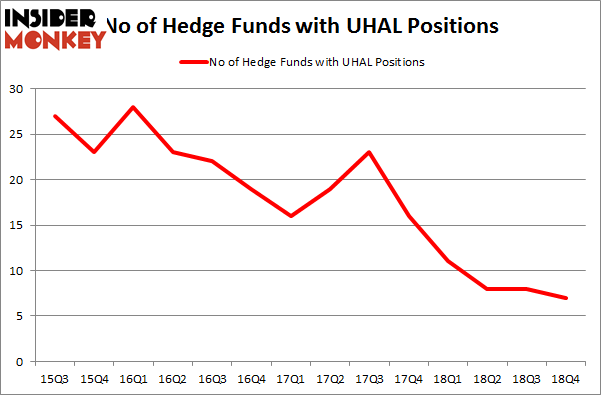 Seeing as AMERCO (NASDAQ:UHAL) has witnessed falling interest from the aggregate hedge fund industry, we can see that there was a specific group of funds who were dropping their positions entirely last quarter. Interestingly, Amit Nitin Doshi’s Harbor Spring Capital dumped the largest position of all the hedgies monitored by Insider Monkey, totaling close to $41.4 million in stock. Ken Griffin’s fund, Citadel Investment Group, also sold off its stock, about $0.3 million worth. These bearish behaviors are intriguing to say the least, as total hedge fund interest was cut by 1 funds last quarter.

As you can see these stocks had an average of 27 hedge funds with bullish positions and the average amount invested in these stocks was $412 million. That figure was $348 million in UHAL’s case. KAR Auction Services Inc (NYSE:KAR) is the most popular stock in this table. On the other hand Zillow Group Inc (NASDAQ:Z) is the least popular one with only 23 bullish hedge fund positions. Compared to these stocks AMERCO (NASDAQ:UHAL) is even less popular than Z. Considering that hedge funds aren’t fond of this stock in relation to other companies analyzed in this article, it may be a good idea to analyze it in detail and understand why the smart money isn’t behind this stock. This isn’t necessarily bad news. Although it is possible that hedge funds may think the stock is overpriced and view the stock as a short candidate, they may not be very familiar with the bullish thesis. Our calculations showed that top 15 most popular stocks among hedge funds returned 21.3% through April 8th and outperformed the S&P 500 ETF (SPY) by more than 5 percentage points. Unfortunately UHAL wasn’t in this group. Hedge funds that bet on UHAL were disappointed as the stock returned 12.6% and underperformed the market. If you are interested in investing in large cap stocks, you should check out the top 15 hedge fund stocks as 12 of these outperformed the market.