After several tireless days we have finished crunching the numbers from nearly 750 13F filings issued by the elite hedge funds and other investment firms that we track at Insider Monkey, which disclosed those firms’ equity portfolios as of December 31. The results of that effort will be put on display in this article, as we share valuable insight into the smart money sentiment towards Amdocs Limited (NASDAQ:DOX).

According to most investors, hedge funds are seen as slow, old investment tools of the past. While there are over 8000 funds trading today, Our researchers choose to focus on the crème de la crème of this group, approximately 750 funds. It is estimated that this group of investors control the majority of the smart money’s total capital, and by tracking their inimitable picks, Insider Monkey has unearthed several investment strategies that have historically outstripped Mr. Market. Insider Monkey’s flagship hedge fund strategy exceeded the S&P 500 index by nearly 5 percentage points annually since its inception in May 2014 through early November 2018. We were able to generate large returns even by identifying short candidates. Our portfolio of short stocks lost 27.5% since February 2017 (through March 12th) even though the market was up nearly 25% during the same period. We just shared a list of 6 short targets in our latest quarterly update and they are already down an average of 6% in less than a month.

Heading into the first quarter of 2019, a total of 24 of the hedge funds tracked by Insider Monkey were bullish on this stock, a change of 14% from one quarter earlier. Below, you can check out the change in hedge fund sentiment towards DOX over the last 14 quarters. So, let’s find out which hedge funds were among the top holders of the stock and which hedge funds were making big moves. 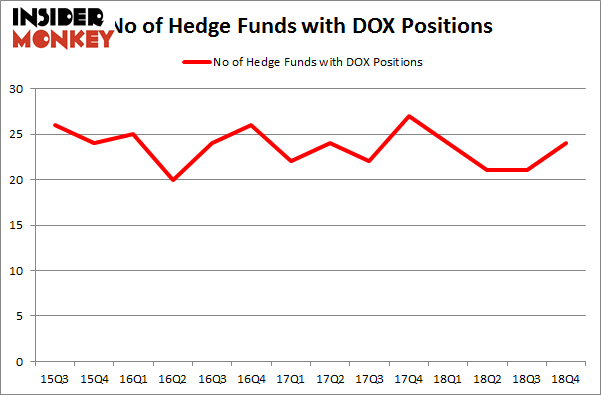 According to publicly available hedge fund and institutional investor holdings data compiled by Insider Monkey, Cliff Asness’s AQR Capital Management has the number one position in Amdocs Limited (NASDAQ:DOX), worth close to $180.8 million, amounting to 0.2% of its total 13F portfolio. On AQR Capital Management’s heels is D E Shaw, managed by D. E. Shaw, which holds a $80.7 million position; 0.1% of its 13F portfolio is allocated to the company. Other professional money managers that are bullish include Peter Rathjens, Bruce Clarke and John Campbell’s Arrowstreet Capital, John W. Rogers’s Ariel Investments and John Overdeck and David Siegel’s Two Sigma Advisors.

With a general bullishness amongst the heavyweights, specific money managers were leading the bulls’ herd. Lunia Capital, managed by Vikas Lunia, assembled the biggest position in Amdocs Limited (NASDAQ:DOX). Lunia Capital had $20.6 million invested in the company at the end of the quarter. Israel Englander’s Millennium Management also made a $10.1 million investment in the stock during the quarter. The following funds were also among the new DOX investors: Bruce Garelick’s Garelick Capital Partners, Alec Litowitz and Ross Laser’s Magnetar Capital, and George Zweig, Shane Haas and Ravi Chander’s Signition LP.

As you can see these stocks had an average of 35 hedge funds with bullish positions and the average amount invested in these stocks was $1557 million. That figure was $533 million in DOX’s case. Arconic Inc. (NYSE:ARNC) is the most popular stock in this table. On the other hand Huntington Ingalls Industries Inc (NYSE:HII) is the least popular one with only 27 bullish hedge fund positions. Compared to these stocks Amdocs Limited (NASDAQ:DOX) is even less popular than HII. Considering that hedge funds aren’t fond of this stock in relation to other companies analyzed in this article, it may be a good idea to analyze it in detail and understand why the smart money isn’t behind this stock. This isn’t necessarily bad news. Although it is possible that hedge funds may think the stock is overpriced and view the stock as a short candidate, they may not be very familiar with the bullish thesis. In either case more research is warranted. Our calculations showed that top 15 most popular stocks among hedge funds returned 21.3% through April 8th and outperformed the S&P 500 ETF (SPY) by more than 5 percentage points. Unfortunately DOX wasn’t in this group. Hedge funds that bet on DOX were disappointed as the stock lost 5.5% and underperformed the market. If you are interested in investing in large cap stocks, you should check out the top 15 hedge fund stocks as 12 of these outperformed the market.