Before we spend days researching a stock idea we’d like to take a look at how hedge funds and billionaire investors recently traded that stock. S&P 500 Index ETF (SPY) lost 2.6% in the first two months of the second quarter. Ten out of 11 industry groups in the S&P 500 Index lost value in May. The average return of a randomly picked stock in the index was even worse (-3.6%). This means you (or a monkey throwing a dart) have less than an even chance of beating the market by randomly picking a stock. On the other hand, the top 20 most popular S&P 500 stocks among hedge funds not only generated positive returns but also outperformed the index by about 3 percentage points through May 30th. In this article, we will take a look at what hedge funds think about Amdocs Limited (NASDAQ:DOX).

Is Amdocs Limited (NASDAQ:DOX) going to take off soon? Hedge funds are in a bullish mood. The number of long hedge fund positions moved up by 2 recently. Our calculations also showed that dox isn’t among the 30 most popular stocks among hedge funds. DOX was in 26 hedge funds’ portfolios at the end of March. There were 24 hedge funds in our database with DOX holdings at the end of the previous quarter.

In today’s marketplace there are many indicators shareholders use to size up stocks. Two of the most under-the-radar indicators are hedge fund and insider trading moves. We have shown that, historically, those who follow the best picks of the top money managers can outclass their index-focused peers by a solid amount (see the details here).

At Q1’s end, a total of 26 of the hedge funds tracked by Insider Monkey held long positions in this stock, a change of 8% from the previous quarter. On the other hand, there were a total of 24 hedge funds with a bullish position in DOX a year ago. With hedge funds’ sentiment swirling, there exists an “upper tier” of key hedge fund managers who were adding to their stakes considerably (or already accumulated large positions). 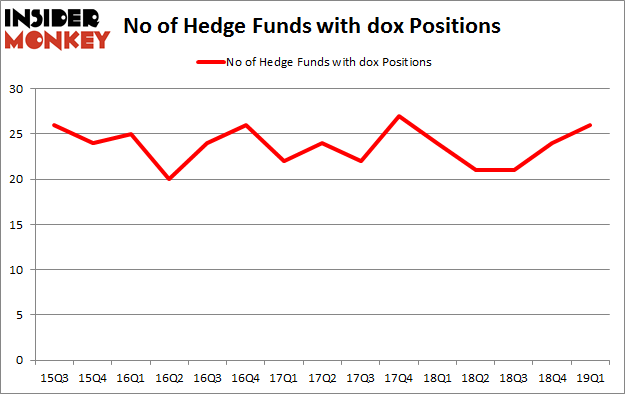 More specifically, AQR Capital Management was the largest shareholder of Amdocs Limited (NASDAQ:DOX), with a stake worth $128.5 million reported as of the end of March. Trailing AQR Capital Management was Arrowstreet Capital, which amassed a stake valued at $98.3 million. D E Shaw, Two Sigma Advisors, and Ariel Investments were also very fond of the stock, giving the stock large weights in their portfolios.

Let’s now review hedge fund activity in other stocks – not necessarily in the same industry as Amdocs Limited (NASDAQ:DOX) but similarly valued. We will take a look at Bio-Techne Corporation (NASDAQ:TECH), Bunge Limited (NYSE:BG), Apartment Investment and Management Company (NYSE:AIV), and Gildan Activewear Inc (NYSE:GIL). All of these stocks’ market caps are closest to DOX’s market cap.

As you can see these stocks had an average of 25.25 hedge funds with bullish positions and the average amount invested in these stocks was $565 million. That figure was $620 million in DOX’s case. Bunge Limited (NYSE:BG) is the most popular stock in this table. On the other hand Bio-Techne Corporation (NASDAQ:TECH) is the least popular one with only 18 bullish hedge fund positions. Amdocs Limited (NASDAQ:DOX) is not the most popular stock in this group but hedge fund interest is still above average. Our calculations showed that top 20 most popular stocks among hedge funds returned 1.9% in Q2 through May 30th and outperformed the S&P 500 ETF (SPY) by more than 3 percentage points. Hedge funds were also right about betting on DOX as the stock returned 8.9% during the same period and outperformed the market by an even larger margin. Hedge funds were rewarded for their relative bullishness.