The Insider Monkey team has completed processing the quarterly 13F filings for the March quarter submitted by the hedge funds and other money managers included in our extensive database. Most hedge fund investors experienced strong gains on the back of a strong market performance, which certainly propelled them to adjust their equity holdings so as to maintain the desired risk profile. As a result, the relevancy of these public filings and their content is indisputable, as they may reveal numerous high-potential stocks. The following article will discuss the smart money sentiment towards Ambev SA (NYSE:ABEV).

Ambev SA (NYSE:ABEV) shares haven’t seen a lot of action during the first quarter. Overall, hedge fund sentiment was unchanged. The stock was in 13 hedge funds’ portfolios at the end of the first quarter of 2019. The level and the change in hedge fund popularity aren’t the only variables you need to analyze to decipher hedge funds’ perspectives. A stock may witness a boost in popularity but it may still be less popular than similarly priced stocks. That’s why at the end of this article we will examine companies such as Becton, Dickinson and Company (NYSE:BDX), Vale SA (NYSE:VALE), and Celgene Corporation (NASDAQ:CELG) to gather more data points. 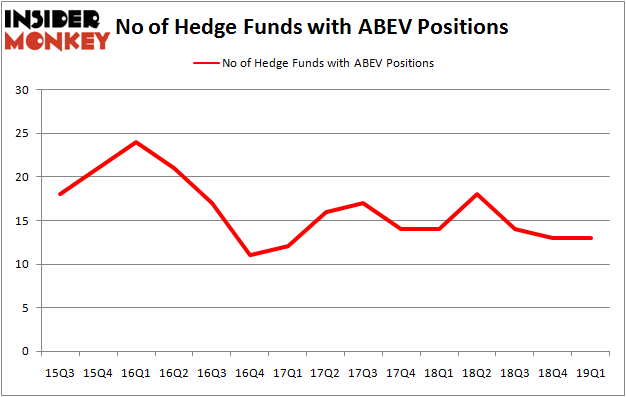 More specifically, Fisher Asset Management was the largest shareholder of Ambev SA (NYSE:ABEV), with a stake worth $110.2 million reported as of the end of March. Trailing Fisher Asset Management was Renaissance Technologies, which amassed a stake valued at $59.9 million. Citadel Investment Group, D E Shaw, and Two Sigma Advisors were also very fond of the stock, giving the stock large weights in their portfolios.

Judging by the fact that Ambev SA (NYSE:ABEV) has faced declining sentiment from the entirety of the hedge funds we track, it’s easy to see that there was a specific group of money managers that slashed their positions entirely by the end of the third quarter. At the top of the heap, Ken Heebner’s Capital Growth Management dropped the largest investment of the “upper crust” of funds watched by Insider Monkey, comprising about $40 million in stock, and David Kowitz and Sheldon Kasowitz’s Indus Capital was right behind this move, as the fund dropped about $3.6 million worth. These moves are intriguing to say the least, as total hedge fund interest stayed the same (this is a bearish signal in our experience).

Let’s go over hedge fund activity in other stocks – not necessarily in the same industry as Ambev SA (NYSE:ABEV) but similarly valued. We will take a look at Becton, Dickinson and Company (NYSE:BDX), Vale SA (NYSE:VALE), Celgene Corporation (NASDAQ:CELG), and Intuitive Surgical, Inc. (NASDAQ:ISRG). This group of stocks’ market values are closest to ABEV’s market value.

As you can see these stocks had an average of 49.5 hedge funds with bullish positions and the average amount invested in these stocks was $3851 million. That figure was $248 million in ABEV’s case. Celgene Corporation (NASDAQ:CELG) is the most popular stock in this table. On the other hand Vale SA (NYSE:VALE) is the least popular one with only 22 bullish hedge fund positions. Compared to these stocks Ambev SA (NYSE:ABEV) is even less popular than VALE. Hedge funds clearly dropped the ball on ABEV as the stock delivered strong returns, though hedge funds’ consensus picks still generated respectable returns. Our calculations showed that top 20 most popular stocks among hedge funds returned 6.2% in Q2 through June 19th and outperformed the S&P 500 ETF (SPY) by nearly 3 percentage points. A small number of hedge funds were also right about betting on ABEV as the stock returned 10.5% during the same period and outperformed the market by an even larger margin.