With the fourth-quarter round of 13F filings behind us it is time to take a look at the stocks in which some of the best money managers in the world preferred to invest or sell heading into the first quarter. One of these stocks was Alder Biopharmaceuticals Inc (NASDAQ:ALDR).

Alder Biopharmaceuticals Inc (NASDAQ:ALDR) was in 15 hedge funds’ portfolios at the end of the fourth quarter of 2018. ALDR has experienced a decrease in hedge fund sentiment recently. There were 16 hedge funds in our database with ALDR holdings at the end of the previous quarter. Our calculations also showed that ALDR isn’t among the 30 most popular stocks among hedge funds.

What does the smart money think about Alder Biopharmaceuticals Inc (NASDAQ:ALDR)?

At Q4’s end, a total of 15 of the hedge funds tracked by Insider Monkey were long this stock, a change of -6% from the previous quarter. On the other hand, there were a total of 17 hedge funds with a bullish position in ALDR a year ago. With hedge funds’ sentiment swirling, there exists a select group of noteworthy hedge fund managers who were boosting their holdings substantially (or already accumulated large positions). 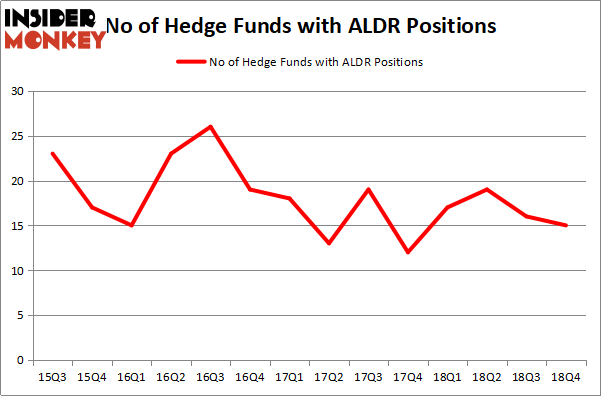 Among these funds, Redmile Group held the most valuable stake in Alder Biopharmaceuticals Inc (NASDAQ:ALDR), which was worth $66.7 million at the end of the fourth quarter. On the second spot was Foresite Capital which amassed $30.2 million worth of shares. Moreover, Samlyn Capital, Palo Alto Investors, and Rock Springs Capital Management were also bullish on Alder Biopharmaceuticals Inc (NASDAQ:ALDR), allocating a large percentage of their portfolios to this stock.

Due to the fact that Alder Biopharmaceuticals Inc (NASDAQ:ALDR) has witnessed declining sentiment from the entirety of the hedge funds we track, it’s safe to say that there is a sect of funds who sold off their entire stakes heading into Q3. At the top of the heap, Christopher James’s Partner Fund Management dropped the biggest stake of the 700 funds tracked by Insider Monkey, worth an estimated $38.1 million in stock. Howard Marks’s fund, Oaktree Capital Management, also said goodbye to its stock, about $9.1 million worth. These transactions are intriguing to say the least, as aggregate hedge fund interest fell by 1 funds heading into Q3.

As you can see these stocks had an average of 17 hedge funds with bullish positions and the average amount invested in these stocks was $106 million. That figure was $207 million in ALDR’s case. Hanger, Inc. (NYSE:HNGR) is the most popular stock in this table. On the other hand Infinera Corp. (NASDAQ:INFN) is the least popular one with only 16 bullish hedge fund positions. Compared to these stocks Alder Biopharmaceuticals Inc (NASDAQ:ALDR) is even less popular than INFN. Hedge funds clearly dropped the ball on ALDR as the stock delivered strong returns, though hedge funds’ consensus picks still generated respectable returns. Our calculations showed that top 15 most popular stocks) among hedge funds returned 24.2% through April 22nd and outperformed the S&P 500 ETF (SPY) by more than 7 percentage points. A small number of hedge funds were also right about betting on ALDR as the stock returned 24.5% and outperformed the market by an even larger margin.