The 700+ hedge funds and famous money managers tracked by Insider Monkey have already compiled and submitted their 13F filings for the first quarter, which unveil their equity positions as of March 31. We went through these filings, fixed typos and other more significant errors and identified the changes in hedge fund portfolios. Our extensive review of these public filings is finally over, so this article is set to reveal the smart money sentiment towards Akamai Technologies, Inc. (NASDAQ:AKAM).

Akamai Technologies, Inc. (NASDAQ:AKAM) investors should pay attention to a decrease in enthusiasm from smart money of late. AKAM was in 28 hedge funds’ portfolios at the end of the first quarter of 2019. There were 34 hedge funds in our database with AKAM positions at the end of the previous quarter. Our calculations also showed that akam isn’t among the 30 most popular stocks among hedge funds.

What does the smart money think about Akamai Technologies, Inc. (NASDAQ:AKAM)?

Heading into the second quarter of 2019, a total of 28 of the hedge funds tracked by Insider Monkey were bullish on this stock, a change of -18% from one quarter earlier. The graph below displays the number of hedge funds with bullish position in AKAM over the last 15 quarters. With the smart money’s positions undergoing their usual ebb and flow, there exists an “upper tier” of noteworthy hedge fund managers who were increasing their holdings substantially (or already accumulated large positions). 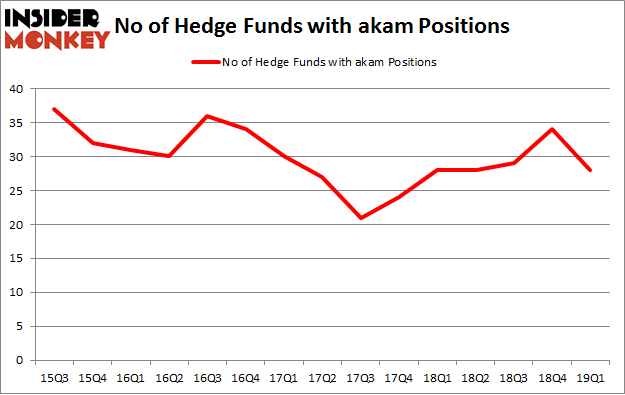 The largest stake in Akamai Technologies, Inc. (NASDAQ:AKAM) was held by AQR Capital Management, which reported holding $314 million worth of stock at the end of March. It was followed by GLG Partners with a $59.7 million position. Other investors bullish on the company included D E Shaw, Renaissance Technologies, and Millennium Management.

Because Akamai Technologies, Inc. (NASDAQ:AKAM) has faced bearish sentiment from the entirety of the hedge funds we track, logic holds that there exists a select few hedge funds that decided to sell off their positions entirely in the third quarter. Interestingly, Paul Singer’s Elliott Management cut the largest position of all the hedgies monitored by Insider Monkey, worth an estimated $145.6 million in stock, and Howard Marks’s Oaktree Capital Management was right behind this move, as the fund said goodbye to about $68.7 million worth. These transactions are important to note, as total hedge fund interest was cut by 6 funds in the third quarter.

As you can see these stocks had an average of 27.5 hedge funds with bullish positions and the average amount invested in these stocks was $508 million. That figure was $764 million in AKAM’s case. Masco Corporation (NYSE:MAS) is the most popular stock in this table. On the other hand Brookfield Infrastructure Partners L.P. (NYSE:BIP) is the least popular one with only 7 bullish hedge fund positions. Akamai Technologies, Inc. (NASDAQ:AKAM) is not the most popular stock in this group but hedge fund interest is still above average. Our calculations showed that top 20 most popular stocks among hedge funds returned 1.9% in Q2 through May 30th and outperformed the S&P 500 ETF (SPY) by more than 3 percentage points. Hedge funds were also right about betting on AKAM as the stock returned 7.1% during the same period and outperformed the market by an even larger margin. Hedge funds were rewarded for their relative bullishness.