Does AK Steel Holding Corporation (NYSE:AKS) represent a good buying opportunity at the moment? Let’s briefly check the hedge fund interest towards the company. Hedge fund firms constantly search out bright intellectuals and highly-experienced employees and throw away millions of dollars on satellite photos and other research activities, so it is no wonder why they tend to generate millions in profits each year. It is also true that some hedge fund players fail inconceivably on some occasions, but net net their stock picks have been generating superior risk-adjusted returns on average over the years.

AK Steel Holding Corporation (NYSE:AKS) has seen a decrease in activity from the world’s largest hedge funds of late. Our calculations also showed that AKS isn’t among the 30 most popular stocks among hedge funds. 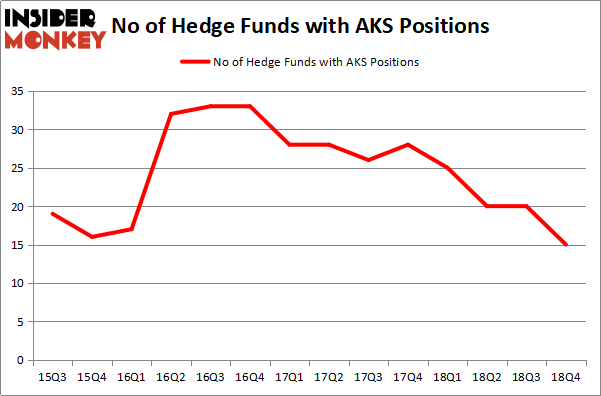 The largest stake in AK Steel Holding Corporation (NYSE:AKS) was held by Millennium Management, which reported holding $9.2 million worth of stock at the end of December. It was followed by GLG Partners with a $4.6 million position. Other investors bullish on the company included DC Capital Partners, Royce & Associates, and Carlson Capital.

Since AK Steel Holding Corporation (NYSE:AKS) has experienced a decline in interest from the entirety of the hedge funds we track, logic holds that there exists a select few hedge funds that decided to sell off their positions entirely last quarter. Interestingly, Philip Rosenstrach’s Pomelo Capital said goodbye to the largest position of all the hedgies monitored by Insider Monkey, totaling an estimated $16.4 million in stock. Alec Litowitz and Ross Laser’s fund, Magnetar Capital, also dumped its stock, about $9 million worth. These bearish behaviors are intriguing to say the least, as total hedge fund interest fell by 5 funds last quarter.