There are several ways to beat the market, and investing in small cap stocks has historically been one of them. We like to improve the odds of beating the market further by examining what famous hedge fund operators such as Jeff Ubben, George Soros and Carl Icahn think. Those hedge fund operators make billions of dollars each year by hiring the best and the brightest to do research on stocks, including small cap stocks that big brokerage houses simply don’t cover. Because of Carl Icahn and other elite funds’ exemplary historical records, we pay attention to their small cap picks. In this article, we use hedge fund filing data to analyze AGCO Corporation (NYSE:AGCO).

Is AGCO Corporation (NYSE:AGCO) an outstanding investment today? The best stock pickers are selling. The number of long hedge fund bets went down by 6 lately. Our calculations also showed that agco isn’t among the 30 most popular stocks among hedge funds.

At the end of the first quarter, a total of 26 of the hedge funds tracked by Insider Monkey held long positions in this stock, a change of -19% from the previous quarter. Below, you can check out the change in hedge fund sentiment towards AGCO over the last 15 quarters. So, let’s review which hedge funds were among the top holders of the stock and which hedge funds were making big moves. 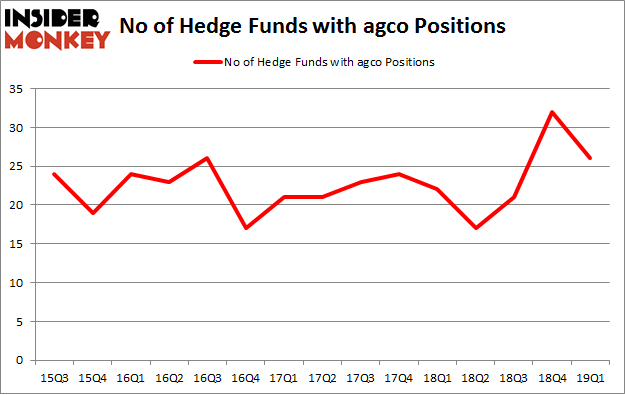 According to publicly available hedge fund and institutional investor holdings data compiled by Insider Monkey, AQR Capital Management, managed by Cliff Asness, holds the number one position in AGCO Corporation (NYSE:AGCO). AQR Capital Management has a $39.8 million position in the stock, comprising less than 0.1%% of its 13F portfolio. Sitting at the No. 2 spot is Impax Asset Management, managed by Ian Simm, which holds a $27.7 million position; 0.4% of its 13F portfolio is allocated to the company. Remaining members of the smart money that hold long positions contain Clint Carlson’s Carlson Capital, David Harding’s Winton Capital Management and Peter Rathjens, Bruce Clarke and John Campbell’s Arrowstreet Capital.

Seeing as AGCO Corporation (NYSE:AGCO) has faced bearish sentiment from the smart money, logic holds that there exists a select few hedge funds that decided to sell off their full holdings in the third quarter. Interestingly, Nick Niell’s Arrowgrass Capital Partners said goodbye to the biggest position of the 700 funds tracked by Insider Monkey, comprising about $8.9 million in call options. Steve Cohen’s fund, Point72 Asset Management, also sold off its call options, about $7.5 million worth. These moves are important to note, as total hedge fund interest dropped by 6 funds in the third quarter.

Let’s go over hedge fund activity in other stocks – not necessarily in the same industry as AGCO Corporation (NYSE:AGCO) but similarly valued. We will take a look at Quanta Services Inc (NYSE:PWR), Vipshop Holdings Limited (NYSE:VIPS), Array Biopharma Inc (NASDAQ:ARRY), and Transocean Ltd (NYSE:RIG). This group of stocks’ market values are similar to AGCO’s market value.

As you can see these stocks had an average of 27.5 hedge funds with bullish positions and the average amount invested in these stocks was $705 million. That figure was $201 million in AGCO’s case. Transocean Ltd (NYSE:RIG) is the most popular stock in this table. On the other hand Vipshop Holdings Limited (NYSE:VIPS) is the least popular one with only 17 bullish hedge fund positions. AGCO Corporation (NYSE:AGCO) is not the least popular stock in this group but hedge fund interest is still below average. This is a slightly negative signal and we’d rather spend our time researching stocks that hedge funds are piling on. Our calculations showed that top 20 most popular stocks among hedge funds returned 1.9% in Q2 through May 30th and outperformed the S&P 500 ETF (SPY) by more than 3 percentage points. Unfortunately AGCO wasn’t nearly as popular as these 20 stocks (hedge fund sentiment was quite bearish); AGCO investors were disappointed as the stock returned -2.8% during the same time period and underperformed the market. If you are interested in investing in large cap stocks with huge upside potential, you should check out the top 20 most popular stocks among hedge funds as 13 of these stocks already outperformed the market so far in Q2.