Adaptimmune Therapeutics plc (NASDAQ:ADAP) was in 12 hedge funds’ portfolios at the end of the fourth quarter of 2018. ADAP shareholders have witnessed a decrease in hedge fund interest lately. There were 13 hedge funds in our database with ADAP holdings at the end of the previous quarter. Our calculations also showed that ADAP isn’t among the 30 most popular stocks among hedge funds.

In the financial world there are a multitude of indicators investors can use to evaluate their holdings. A couple of the most underrated indicators are hedge fund and insider trading moves. Our experts have shown that, historically, those who follow the best picks of the elite hedge fund managers can outpace the market by a solid margin (see the details here).

Heading into the first quarter of 2019, a total of 12 of the hedge funds tracked by Insider Monkey held long positions in this stock, a change of -8% from one quarter earlier. The graph below displays the number of hedge funds with bullish position in ADAP over the last 14 quarters. With the smart money’s positions undergoing their usual ebb and flow, there exists an “upper tier” of key hedge fund managers who were adding to their stakes meaningfully (or already accumulated large positions). 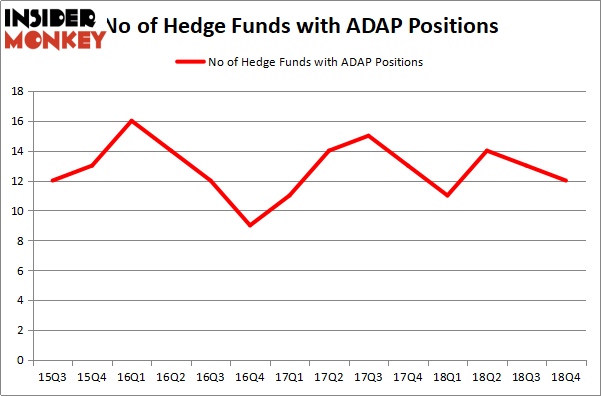 The largest stake in Adaptimmune Therapeutics plc (NASDAQ:ADP) was held by Matrix Capital Management, which reported holding $156.1 million worth of stock at the end of December. It was followed by Millennium Management with a $12.1 million position. Other investors bullish on the company included OrbiMed Advisors, GLG Partners, and Rock Springs Capital Management.

Seeing as Adaptimmune Therapeutics plc (NASDAQ:ADP) has faced a decline in interest from hedge fund managers, we can see that there were a few funds that decided to sell off their entire stakes in the third quarter. Intriguingly, Daniel Gold’s QVT Financial sold off the biggest investment of all the hedgies monitored by Insider Monkey, worth an estimated $4.9 million in stock. Steve Cohen’s fund, Point72 Asset Management, also said goodbye to its stock, about $4.1 million worth. These transactions are intriguing to say the least, as total hedge fund interest fell by 1 funds in the third quarter.

As you can see these stocks had an average of 7 hedge funds with bullish positions and the average amount invested in these stocks was $51 million. That figure was $196 million in ADAP’s case. Conn’s, Inc. (NASDAQ:CONN) is the most popular stock in this table. On the other hand Urstadt Biddle Properties Inc. (NYSE:UBP) is the least popular one with only 2 bullish hedge fund positions. Adaptimmune Therapeutics plc (NASDAQ:ADP) is not the most popular stock in this group but hedge fund interest is still above average. This is a slightly positive signal but we’d rather spend our time researching stocks that hedge funds are piling on. Our calculations showed that top 15 most popular stocks) among hedge funds returned 24.2% through April 22nd and outperformed the S&P 500 ETF (SPY) by more than 7 percentage points. Unfortunately ADAP wasn’t nearly as popular as these 15 stock and hedge funds that were betting on ADAP were disappointed as the stock returned -29.2% and underperformed the market. If you are interested in investing in large cap stocks with huge upside potential, you should check out the top 15 most popular stocks) among hedge funds as 13 of these stocks already outperformed the market this year.