Solaredge Technologies Inc (NASDAQ:SEDG) shares haven’t seen a lot of action during the third quarter. Overall, hedge fund sentiment was unchanged. The stock was in 14 hedge funds’ portfolios at the end of the fourth quarter of 2018. At the end of this article we will also compare SEDG to other stocks including Cohen & Steers, Inc. (NYSE:CNS), Avaya Holdings Corp. (NYSE:AVYA), and Sibanye Gold Ltd (NYSE:SBGL) to get a better sense of its popularity.

How have hedgies been trading Solaredge Technologies Inc (NASDAQ:SEDG)?

At the end of the fourth quarter, a total of 14 of the hedge funds tracked by Insider Monkey were bullish on this stock, a change of 0% from one quarter earlier. By comparison, 18 hedge funds held shares or bullish call options in SEDG a year ago. With hedgies’ sentiment swirling, there exists an “upper tier” of noteworthy hedge fund managers who were increasing their stakes substantially (or already accumulated large positions). 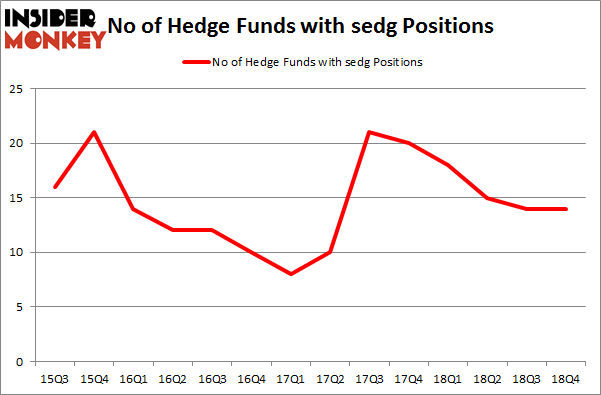 The largest stake in Solaredge Technologies Inc (NASDAQ:SEDG) was held by Renaissance Technologies, which reported holding $15 million worth of stock at the end of December. It was followed by Bloom Tree Partners with a $12.3 million position. Other investors bullish on the company included Citadel Investment Group, Two Sigma Advisors, and OZ Management.

Since Solaredge Technologies Inc (NASDAQ:SEDG) has faced declining sentiment from the smart money, it’s safe to say that there is a sect of funds that elected to cut their entire stakes last quarter. Interestingly, Richard Mashaal’s Rima Senvest Management dropped the largest stake of the “upper crust” of funds monitored by Insider Monkey, comprising about $12.1 million in call options, and Dmitry Balyasny’s Balyasny Asset Management was right behind this move, as the fund dropped about $6.2 million worth. These transactions are interesting, as total hedge fund interest stayed the same (this is a bearish signal in our experience).

Let’s go over hedge fund activity in other stocks – not necessarily in the same industry as Solaredge Technologies Inc (NASDAQ:SEDG) but similarly valued. We will take a look at Cohen & Steers, Inc. (NYSE:CNS), Avaya Holdings Corp. (NYSE:AVYA), Sibanye Gold Ltd (NYSE:SBGL), and Forward Air Corporation (NASDAQ:FWRD). All of these stocks’ market caps are similar to SEDG’s market cap.

As you can see these stocks had an average of 16.75 hedge funds with bullish positions and the average amount invested in these stocks was $127 million. That figure was $51 million in SEDG’s case. Avaya Holdings Corp. (NYSE:AVYA) is the most popular stock in this table. On the other hand Cohen & Steers, Inc. (NYSE:CNS) is the least popular one with only 8 bullish hedge fund positions. Solaredge Technologies Inc (NASDAQ:SEDG) is not the least popular stock in this group but hedge fund interest is still below average. Our calculations showed that top 15 most popular stocks) among hedge funds returned 24.2% through April 22nd and outperformed the S&P 500 ETF (SPY) by more than 7 percentage points. A small number of hedge funds were also right about betting on SEDG, though not to the same extent, as the stock returned 23.1% and outperformed the market as well.