Does Aaron’s, Inc. (NYSE:AAN) represent a good buying opportunity at the moment? Let’s quickly check the hedge fund interest towards the company. Hedge fund firms constantly search out bright intellectuals and highly-experienced employees and throw away millions of dollars on satellite photos and other research activities, so it is no wonder why they tend to generate millions in profits each year. It is also true that some hedge fund players fail inconceivably on some occasions, but net net their stock picks have been generating superior risk-adjusted returns on average over the years.

Is Aaron’s, Inc. (NYSE:AAN) a buy right now? The best stock pickers are buying. The number of bullish hedge fund positions inched up by 2 in recent months. Our calculations also showed that AAN isn’t among the 30 most popular stocks among hedge funds (view the video below).

If you’d ask most stock holders, hedge funds are seen as unimportant, old investment vehicles of the past. While there are over 8000 funds with their doors open today, Our researchers hone in on the masters of this club, approximately 750 funds. These money managers control the lion’s share of all hedge funds’ total asset base, and by watching their best equity investments, Insider Monkey has unearthed many investment strategies that have historically outpaced Mr. Market. Insider Monkey’s flagship hedge fund strategy outstripped the S&P 500 index by around 5 percentage points per year since its inception in May 2014. We were able to generate large returns even by identifying short candidates. Our portfolio of short stocks lost 25.7% since February 2017 (through September 30th) even though the market was up more than 33% during the same period. We just shared a list of 10 short targets in our latest quarterly update . 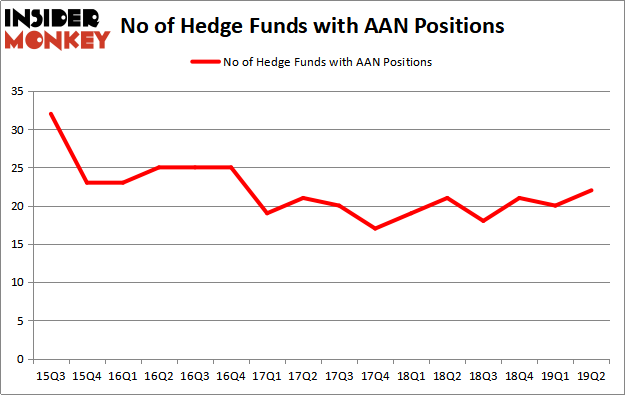 When looking at the institutional investors followed by Insider Monkey, Peter Rathjens, Bruce Clarke and John Campbell’s Arrowstreet Capital has the largest position in Aaron’s, Inc. (NYSE:AAN), worth close to $51.5 million, corresponding to 0.1% of its total 13F portfolio. The second most bullish fund manager is Portolan Capital Management, led by George McCabe, holding a $36 million position; 3.9% of its 13F portfolio is allocated to the stock. Other members of the smart money that hold long positions include Alexander Mitchell’s Scopus Asset Management, D. E. Shaw’s D E Shaw and Ken Grossman and Glen Schneider’s SG Capital Management.

As you can see these stocks had an average of 16.25 hedge funds with bullish positions and the average amount invested in these stocks was $224 million. That figure was $337 million in AAN’s case. Nomad Foods Limited Ordinary Shares (NYSE:NOMD) is the most popular stock in this table. On the other hand DCP Midstream LP (NYSE:DCP) is the least popular one with only 2 bullish hedge fund positions. Aaron’s, Inc. (NYSE:AAN) is not the most popular stock in this group but hedge fund interest is still above average. Our calculations showed that top 20 most popular stocks among hedge funds returned 24.4% in 2019 through September 30th and outperformed the S&P 500 ETF (SPY) by 4 percentage points. Hedge funds were also right about betting on AAN, though not to the same extent, as the stock returned 4.7% during the third quarter and outperformed the market as well.