How do you pick the next stock to invest in? One way would be to spend hours of research browsing through thousands of publicly traded companies. However, an easier way is to look at the stocks that smart money investors are collectively bullish on. Hedge funds and other institutional investors usually invest large amounts of capital and have to conduct due diligence while choosing their next pick. They don’t always get it right, but, on average, their stock picks historically generated strong returns after adjusting for known risk factors. With this in mind, let’s take a look at the recent hedge fund activity surrounding MYR Group Inc (NASDAQ:MYRG).

Is MYR Group Inc (NASDAQ:MYRG) a healthy stock for your portfolio? Hedge funds are taking a bullish view. The number of long hedge fund positions rose by 1 lately. Our calculations also showed that MYRG isn’t among the 30 most popular stocks among hedge funds. MYRG was in 12 hedge funds’ portfolios at the end of December. There were 11 hedge funds in our database with MYRG holdings at the end of the previous quarter.

At the end of the fourth quarter, a total of 12 of the hedge funds tracked by Insider Monkey were long this stock, a change of 9% from the previous quarter. By comparison, 9 hedge funds held shares or bullish call options in MYRG a year ago. With the smart money’s capital changing hands, there exists an “upper tier” of notable hedge fund managers who were adding to their stakes substantially (or already accumulated large positions). 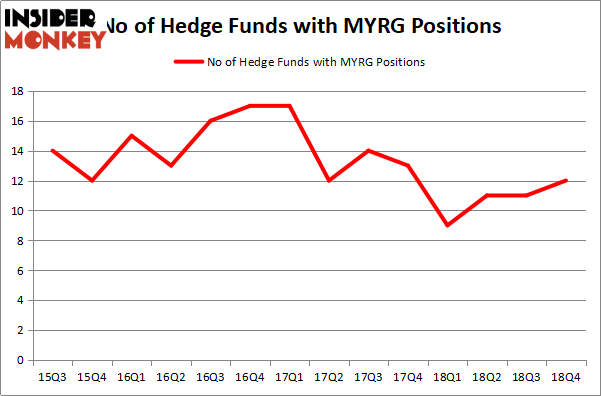 Of the funds tracked by Insider Monkey, Third Avenue Management, managed by Martin Whitman, holds the most valuable position in MYR Group Inc (NASDAQ:MYRG). Third Avenue Management has a $9.1 million position in the stock, comprising 0.7% of its 13F portfolio. Coming in second is Fisher Asset Management, managed by Ken Fisher, which holds a $1.8 million position; less than 0.1%% of its 13F portfolio is allocated to the stock. Other members of the smart money that hold long positions include Cliff Asness’s AQR Capital Management, John Overdeck and David Siegel’s Two Sigma Advisors and D. E. Shaw’s D E Shaw.

With a general bullishness amongst the heavyweights, specific money managers were leading the bulls’ herd. GLG Partners, managed by Noam Gottesman, created the largest position in MYR Group Inc (NASDAQ:MYRG). GLG Partners had $1.1 million invested in the company at the end of the quarter. Gavin Saitowitz and Cisco J. del Valle’s Springbok Capital also made a $0 million investment in the stock during the quarter.

As you can see these stocks had an average of 6.5 hedge funds with bullish positions and the average amount invested in these stocks was $15 million. That figure was $18 million in MYRG’s case. HCI Group, Inc. (NYSE:HCI) is the most popular stock in this table. On the other hand Nicolet Bankshares Inc. (NASDAQ:NCBS) is the least popular one with only 3 bullish hedge fund positions. Compared to these stocks MYR Group Inc (NASDAQ:MYRG) is more popular among hedge funds. Our calculations showed that top 15 most popular stocks) among hedge funds returned 24.2% through April 22nd and outperformed the S&P 500 ETF (SPY) by more than 7 percentage points. Hedge funds were also right about betting on MYRG as the stock returned 30.3% and outperformed the market by an even larger margin. Hedge funds were clearly right about piling into this stock relative to other stocks with similar market capitalizations.