As we already know from media reports and hedge fund investor letters, many hedge funds lost money in fourth quarter, blaming macroeconomic conditions and unpredictable events that hit several sectors, with technology among them. Nevertheless, most investors decided to stick to their bullish theses and their long-term focus allows us to profit from the recent declines. In particular, let’s take a look at what hedge funds think about Carlyle Group LP (NASDAQ:CG) in this article.

Carlyle Group LP (NASDAQ:CG) shares haven’t seen a lot of action during the third quarter. Overall, hedge fund sentiment was unchanged. The stock was in 10 hedge funds’ portfolios at the end of December. The level and the change in hedge fund popularity aren’t the only variables you need to analyze to decipher hedge funds’ perspectives. A stock may witness a boost in popularity but it may still be less popular than similarly priced stocks. That’s why at the end of this article we will examine companies such as BOK Financial Corporation (NASDAQ:BOKF), Ternium S.A. (NYSE:TX), and Arris International plc (NASDAQ:ARRS) to gather more data points.

If you’d ask most investors, hedge funds are seen as underperforming, outdated investment vehicles of the past. While there are more than 8000 funds trading at present, Our researchers look at the masters of this club, approximately 750 funds. Most estimates calculate that this group of people preside over most of the hedge fund industry’s total asset base, and by following their unrivaled equity investments, Insider Monkey has come up with a number of investment strategies that have historically exceeded the broader indices. Insider Monkey’s flagship hedge fund strategy outpaced the S&P 500 index by nearly 5 percentage points per year since its inception in May 2014 through early November 2018. We were able to generate large returns even by identifying short candidates. Our portfolio of short stocks lost 27.5% since February 2017 (through March 12th) even though the market was up nearly 25% during the same period. We just shared a list of 6 short targets in our latest quarterly update and they are already down an average of 6% in less than a month.

Heading into the first quarter of 2019, a total of 10 of the hedge funds tracked by Insider Monkey were long this stock, a change of 0% from one quarter earlier. The graph below displays the number of hedge funds with bullish position in CG over the last 14 quarters. With hedge funds’ positions undergoing their usual ebb and flow, there exists a few key hedge fund managers who were adding to their stakes significantly (or already accumulated large positions). 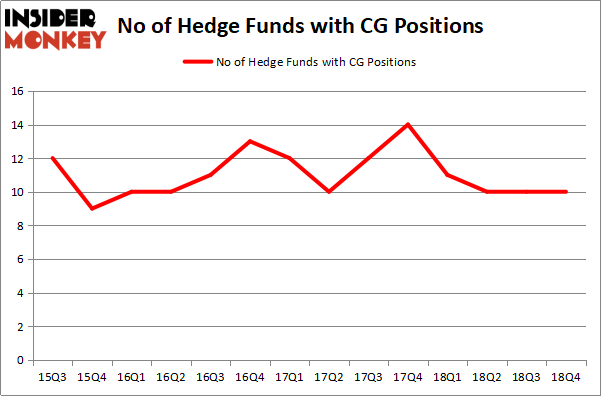 The largest stake in Carlyle Group LP (NASDAQ:CG) was held by Alkeon Capital Management, which reported holding $73.4 million worth of stock at the end of September. It was followed by Markel Gayner Asset Management with a $17.2 million position. Other investors bullish on the company included Harvest Capital Strategies, Marshall Wace LLP, and Serengeti Asset Management.

We view hedge fund activity in the stock unfavorable, but in this case there was only a single hedge fund selling its entire position: Renaissance Technologies. One hedge fund selling its entire position doesn’t always imply a bearish intent. Theoretically a hedge fund may decide to sell a promising position in order to invest the proceeds in a more promising idea. However, we don’t think this is the case in this case because only one of the 800+ hedge funds tracked by Insider Monkey identified as a viable investment and initiated a position in the stock (that fund was Arrowstreet Capital).

As you can see these stocks had an average of 24.75 hedge funds with bullish positions and the average amount invested in these stocks was $428 million. That figure was $113 million in CG’s case. Arris International plc (NASDAQ:ARRS) is the most popular stock in this table. On the other hand Ternium S.A. (NYSE:TX) is the least popular one with only 12 bullish hedge fund positions. Compared to these stocks Carlyle Group LP (NASDAQ:CG) is even less popular than TX. Considering that hedge funds aren’t fond of this stock in relation to other companies analyzed in this article, it may be a good idea to analyze it in detail and understand why the smart money isn’t behind this stock. This isn’t necessarily bad news. Although it is possible that hedge funds may think the stock is overpriced and view the stock as a short candidate, they may not be very familiar with the bullish thesis. Our calculations showed that top 15 most popular stocks among hedge funds returned 21.3% through April 8th and outperformed the S&P 500 ETF (SPY) by more than 5 percentage points. Hedge funds were also right about betting on CG, though not to the same extent, as the stock returned 21.2% and outperformed the market as well.