Is Amdocs Limited (NASDAQ:DOX) a bargain? Investors who are in the know are becoming less confident. The number of long hedge fund positions went down by 1 in recent months. Our calculations also showed that DOX isn’t among the 30 most popular stocks among hedge funds (see the video below). DOX was in 25 hedge funds’ portfolios at the end of the second quarter of 2019. There were 26 hedge funds in our database with DOX positions at the end of the previous quarter.

In the 21st century investor’s toolkit there are dozens of methods shareholders can use to grade stocks. A pair of the most innovative methods are hedge fund and insider trading activity. Our researchers have shown that, historically, those who follow the top picks of the best money managers can outperform the market by a superb margin (see the details here). 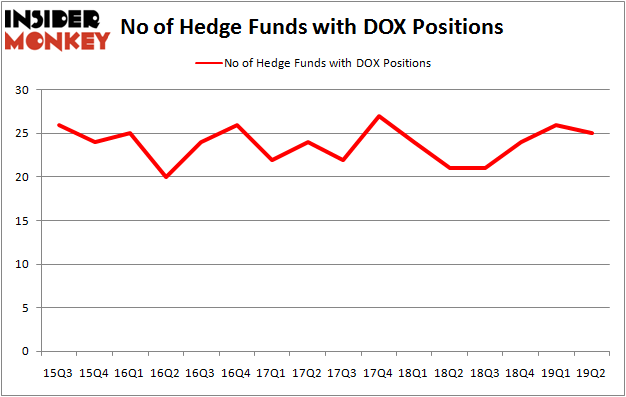 What does smart money think about Amdocs Limited (NASDAQ:DOX)?

Heading into the third quarter of 2019, a total of 25 of the hedge funds tracked by Insider Monkey were long this stock, a change of -4% from one quarter earlier. On the other hand, there were a total of 21 hedge funds with a bullish position in DOX a year ago. With hedgies’ positions undergoing their usual ebb and flow, there exists a select group of noteworthy hedge fund managers who were upping their stakes significantly (or already accumulated large positions).

Due to the fact that Amdocs Limited (NASDAQ:DOX) has witnessed bearish sentiment from hedge fund managers, it’s safe to say that there exists a select few funds that slashed their full holdings by the end of the second quarter. At the top of the heap, Paul Marshall and Ian Wace’s Marshall Wace LLP cut the biggest stake of the 750 funds tracked by Insider Monkey, worth an estimated $14.5 million in stock. Bruce Kovner’s fund, Caxton Associates LP, also dumped its stock, about $0.6 million worth. These moves are interesting, as total hedge fund interest was cut by 1 funds by the end of the second quarter.

As you can see these stocks had an average of 25.5 hedge funds with bullish positions and the average amount invested in these stocks was $793 million. That figure was $678 million in DOX’s case. Ralph Lauren Corporation (NYSE:RL) is the most popular stock in this table. On the other hand Companhia de Saneamento Basico do Estado de Sao Paulo – SABESP (NYSE:SBS) is the least popular one with only 12 bullish hedge fund positions. Amdocs Limited (NASDAQ:DOX) is not the least popular stock in this group but hedge fund interest is still below average. Our calculations showed that top 20 most popular stocks among hedge funds returned 24.4% in 2019 through September 30th and outperformed the S&P 500 ETF (SPY) by 4 percentage points. A small number of hedge funds were also right about betting on DOX as the stock returned 6.9% during the same time frame and outperformed the market by an even larger margin.