Here is What Hedge Funds Are Tweeting About Twitter Inc (TWTR)

Twitter Inc (NYSE:TWTR) has seen an increase in hedge fund sentiment lately. TWTR was in 49 hedge funds’ portfolios at the end of December. There were 42 hedge funds in our database with TWTR positions at the end of the previous quarter. Our calculations also showed that TWTR isn’t among the 30 most popular stocks among hedge funds.

To the average investor there are tons of gauges investors employ to analyze stocks. Two of the most innovative gauges are hedge fund and insider trading moves. We have shown that, historically, those who follow the top picks of the top investment managers can beat their index-focused peers by a very impressive amount (see the details here).

What have hedge funds been doing with Twitter Inc (NYSE:TWTR)?

At Q4’s end, a total of 49 of the hedge funds tracked by Insider Monkey held long positions in this stock, a change of 17% from the previous quarter. On the other hand, there were a total of 44 hedge funds with a bullish position in TWTR a year ago. With the smart money’s sentiment swirling, there exists a select group of noteworthy hedge fund managers who were increasing their holdings meaningfully (or already accumulated large positions). 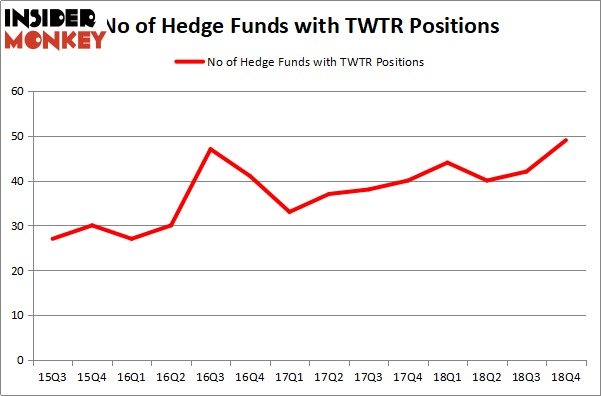 More specifically, D E Shaw was the largest shareholder of Twitter Inc (NYSE:TWTR), with a stake worth $366.7 million reported as of the end of September. Trailing D E Shaw was Coatue Management, which amassed a stake valued at $244.1 million. Citadel Investment Group, SRS Investment Management, and Alkeon Capital Management were also very fond of the stock, giving the stock large weights in their portfolios.

Now, key hedge funds have jumped into Twitter Inc (NYSE:TWTR) headfirst. SRS Investment Management, managed by Karthik Sarma, assembled the biggest position in Twitter Inc (NYSE:TWTR). SRS Investment Management had $140.2 million invested in the company at the end of the quarter. Israel Englander’s Millennium Management also made a $109 million investment in the stock during the quarter. The other funds with new positions in the stock are Brandon Haley’s Holocene Advisors, John Osterweis’s Osterweis Capital Management, and Mark Moore’s ThornTree Capital Partners.

As you can see these stocks had an average of 35.75 hedge funds with bullish positions and the average amount invested in these stocks was $1563 million. That figure was $1541 million in TWTR’s case. NXP Semiconductors NV (NASDAQ:NXPI) is the most popular stock in this table. On the other hand Wisconsin Energy Group, Inc. (NYSE:WEC) is the least popular one with only 13 bullish hedge fund positions. Twitter Inc (NYSE:TWTR) is not the most popular stock in this group but hedge fund interest is still above average. This is a slightly positive signal but we’d rather spend our time researching stocks that hedge funds are piling on. Our calculations showed that top 15 most popular stocks among hedge funds returned 19.7% through March 15th and outperformed the S&P 500 ETF (SPY) by 6.6 percentage points. Unfortunately Twitter wasn’t in this group. Hedge funds that bet on Twitter were disappointed as the stock returned 8.6% and underperformed the market. If you are interested in investing in large cap stocks, you should check out the top 15 hedge fund stocks as 13 of these outperformed the market.