Wisconsin Energy Group, Inc. (NYSE:WEC) was in 13 hedge funds’ portfolios at the end of December. WEC investors should be aware of a decrease in hedge fund interest recently. There were 19 hedge funds in our database with WEC positions at the end of the previous quarter. Our calculations also showed that WEC isn’t among the 30 most popular stocks among hedge funds.

To most investors, hedge funds are assumed to be unimportant, outdated investment vehicles of years past. While there are over 8000 funds with their doors open at present, Our experts look at the bigwigs of this group, about 750 funds. These investment experts control most of the smart money’s total asset base, and by observing their best picks, Insider Monkey has unsheathed numerous investment strategies that have historically exceeded Mr. Market. Insider Monkey’s flagship hedge fund strategy beat the S&P 500 index by nearly 5 percentage points annually since its inception in May 2014 through early November 2018. We were able to generate large returns even by identifying short candidates. Our portfolio of short stocks lost 27.5% since February 2017 (through March 12th) even though the market was up nearly 25% during the same period. We just shared a list of 6 short targets in our latest quarterly update and they are already down an average of 6% in less than a month. 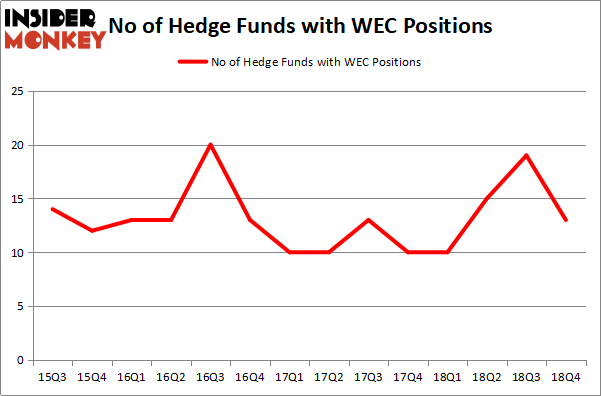 Of the funds tracked by Insider Monkey, Renaissance Technologies, managed by Jim Simons, holds the biggest position in Wisconsin Energy Group, Inc. (NYSE:WEC). Renaissance Technologies has a $309 million position in the stock, comprising 0.3% of its 13F portfolio. Coming in second is AQR Capital Management, led by Cliff Asness, holding a $50 million position; 0.1% of its 13F portfolio is allocated to the stock. Some other professional money managers that hold long positions include Noam Gottesman’s GLG Partners, Michael Gelband’s ExodusPoint Capital and Ken Griffin’s Citadel Investment Group.

Due to the fact that Wisconsin Energy Group, Inc. (NYSE:WEC) has witnessed declining sentiment from the smart money, it’s easy to see that there lies a certain “tier” of hedgies that elected to cut their full holdings by the end of the third quarter. It’s worth mentioning that Israel Englander’s Millennium Management dropped the largest investment of all the hedgies tracked by Insider Monkey, valued at an estimated $9.8 million in stock, and Clint Carlson’s Carlson Capital was right behind this move, as the fund dropped about $7.2 million worth. These moves are intriguing to say the least, as total hedge fund interest was cut by 6 funds by the end of the third quarter.

As you can see these stocks had an average of 38.75 hedge funds with bullish positions and the average amount invested in these stocks was $1547 million. That figure was $381 million in WEC’s case. NXP Semiconductors NV (NASDAQ:NXPI) is the most popular stock in this table. On the other hand Coca-Cola European Partners plc (NYSE:CCEP) is the least popular one with only 17 bullish hedge fund positions. Compared to these stocks Wisconsin Energy Group, Inc. (NYSE:WEC) is even less popular than CCEP. Our calculations showed that top 15 most popular stocks among hedge funds returned 19.7% through March 15th and outperformed the S&P 500 ETF (SPY) by 6.6 percentage points. Only a handful of hedge funds were also right about betting on WEC, though not to the same extent, as the stock returned 14.8% and outperformed the market as well.