Here is What Hedge Funds Think About Williams-Sonoma, Inc. (WSM)

Looking for stocks with high upside potential? Just follow the big players within the hedge fund industry. Why should you do so? Let’s take a brief look at what statistics have to say about hedge funds’ stock picking abilities to illustrate. The Standard and Poor’s 500 Index returned approximately 5.7% in the 12 months ending October 26 (including dividend payments). Conversely, hedge funds’ 30 preferred S&P 500 stocks (as of June 2014) generated a return of 15.1% during the same 12-month period, with 53% of these stock picks outperforming the broader market benchmark. Coincidence? It might happen to be so, but it is unlikely. Our research covering the last 18 years indicates that hedge funds’ stock picks generate superior risk-adjusted returns. That’s why we believe it is wise to check hedge fund activity before you invest your time or your savings on a stock like Williams-Sonoma, Inc. (NYSE:WSM).

Williams-Sonoma, Inc. (NYSE:WSM) has experienced an increase in hedge fund interest recently. Our calculations also showed that WSM isn’t among the 30 most popular stocks among hedge funds.

What does the smart money think about Williams-Sonoma, Inc. (NYSE:WSM)?

At the end of the third quarter, a total of 23 of the hedge funds tracked by Insider Monkey held long positions in this stock, a change of 5% from the previous quarter. Below, you can check out the change in hedge fund sentiment towards WSM over the last 13 quarters. With hedgies’ capital changing hands, there exists an “upper tier” of noteworthy hedge fund managers who were boosting their stakes meaningfully (or already accumulated large positions). 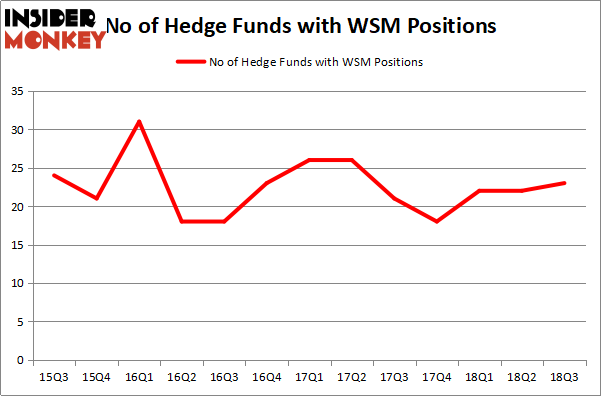 Among these funds, Select Equity Group held the most valuable stake in Williams-Sonoma, Inc. (NYSE:WSM), which was worth $237 million at the end of the third quarter. On the second spot was AQR Capital Management which amassed $177.7 million worth of shares. Moreover, Renaissance Technologies, D E Shaw, and Two Sigma Advisors were also bullish on Williams-Sonoma, Inc. (NYSE:WSM), allocating a large percentage of their portfolios to this stock.

As you can see these stocks had an average of 19 hedge funds with bullish positions and the average amount invested in these stocks was $362 million. That figure was $561 million in WSM’s case. Marriott Vacations Worldwide Corporation (NYSE:VAC) is the most popular stock in this table. On the other hand Centrais Eletricas Brasileiras SA (NYSE:EBR) is the least popular one with only 4 bullish hedge fund positions. Williams-Sonoma, Inc. (NYSE:WSM) is not the most popular stock in this group but hedge fund interest is still above average. This is a slightly positive signal but we’d rather spend our time researching stocks that hedge funds are piling on. In this regard VAC might be a better candidate to consider a long position.

Hedge Funds Are Betting On Papa John’s International, Inc. (PZZA)
Monthly Newsletter Strategy
Download a free copy of our newsletter and see the details inside!
Hedge Fund Resource Center
Related News
11 Highest Paid Female CEOs in America in 2017 Here is What Hedge Funds Think About Williams-Sonoma, Inc. (WSM) CEOs Are Buying and Selling Shares of These Companies Five Small-Cap Stocks That Hedge Funds Were Dumping in Q2 Why Are These Stocks Surging Today? Apple, Walgreens, and McKesson Among Monday’s Market-Shaking Stocks Five Furniture Stocks Hedge Funds Like Five Reasons You Need a Day-Trading Mentor 15 Most Important Medical Discoveries of 2018 The 10 Best Islands to Visit in 2019
Billionaire Hedge Funds