Is Voya Financial Inc (NYSE:VOYA) a good equity to bet on right now? We like to check what the smart money thinks first before doing extensive research on a given stock. Although there have been several high profile failed hedge fund picks, the consensus picks among hedge fund investors have historically outperformed the market after adjusting for known risk attributes. It’s not surprising given that hedge funds have access to better information and more resources to predict the winners in the stock market.

Voya Financial Inc (NYSE:VOYA) investors should be aware of a decrease in enthusiasm from smart money recently. Our calculations also showed that VOYA isn’t among the 30 most popular stocks among hedge funds (see the video below). 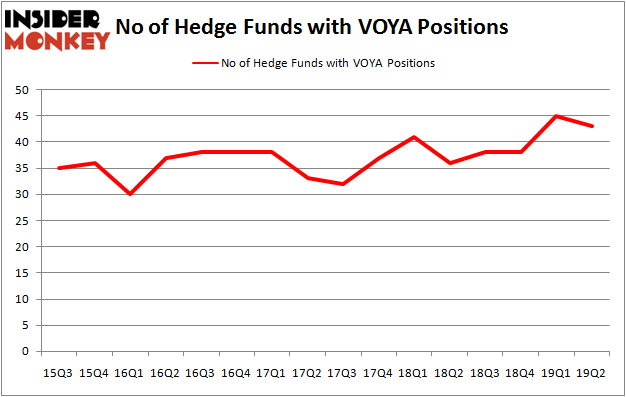 What does smart money think about Voya Financial Inc (NYSE:VOYA)?

At Q2’s end, a total of 43 of the hedge funds tracked by Insider Monkey were bullish on this stock, a change of -4% from one quarter earlier. The graph below displays the number of hedge funds with bullish position in VOYA over the last 16 quarters. With the smart money’s capital changing hands, there exists a few notable hedge fund managers who were increasing their holdings considerably (or already accumulated large positions).

The largest stake in Voya Financial Inc (NYSE:VOYA) was held by Pzena Investment Management, which reported holding $382.9 million worth of stock at the end of March. It was followed by Samlyn Capital with a $123.9 million position. Other investors bullish on the company included Citadel Investment Group, Millennium Management, and Balyasny Asset Management.

Judging by the fact that Voya Financial Inc (NYSE:VOYA) has faced falling interest from the smart money, logic holds that there lies a certain “tier” of funds who sold off their full holdings in the second quarter. Intriguingly, Robert Pohly’s Samlyn Capital said goodbye to the biggest position of the 750 funds monitored by Insider Monkey, comprising close to $50.9 million in stock, and Bain Capital’s Brookside Capital was right behind this move, as the fund said goodbye to about $35.3 million worth. These bearish behaviors are intriguing to say the least, as total hedge fund interest dropped by 2 funds in the second quarter.