Here is What Hedge Funds Think About US Concrete Inc (USCR)

Insider Monkey has processed numerous 13F filings of hedge funds and successful value investors to create an extensive database of hedge fund holdings. The 13F filings show the hedge funds’ and successful investors’ positions as of the end of the second quarter. You can find write-ups about an individual hedge fund’s trades on numerous financial news websites. However, in this article we will take a look at their collective moves and analyze what the smart money thinks of US Concrete Inc (NASDAQ:USCR) based on that data.

US Concrete Inc (NASDAQ:USCR) shares haven’t seen a lot of action during the second quarter. Overall, hedge fund sentiment was unchanged. The stock was in 17 hedge funds’ portfolios at the end of June. The level and the change in hedge fund popularity aren’t the only variables you need to analyze to decipher hedge funds’ perspectives. A stock may witness a boost in popularity but it may still be less popular than similarly priced stocks. That’s why at the end of this article we will examine companies such as Adecoagro SA (NYSE:AGRO), istar Inc (NYSE:STAR), and Century Communities, Inc (NYSE:CCS) to gather more data points. Our calculations also showed that USCR isn’t among the 30 most popular stocks among hedge funds (see the video below). 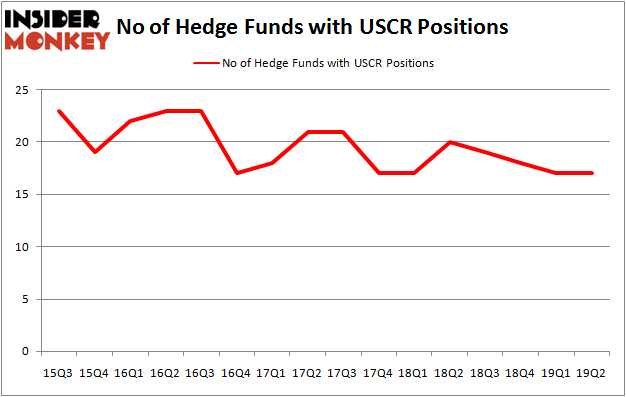 How have hedgies been trading US Concrete Inc (NASDAQ:USCR)?

At Q2’s end, a total of 17 of the hedge funds tracked by Insider Monkey held long positions in this stock, a change of 0% from the previous quarter. The graph below displays the number of hedge funds with bullish position in USCR over the last 16 quarters. With the smart money’s positions undergoing their usual ebb and flow, there exists a few key hedge fund managers who were increasing their stakes significantly (or already accumulated large positions).

The largest stake in US Concrete Inc (NASDAQ:USCR) was held by Lomas Capital Management, which reported holding $37.3 million worth of stock at the end of March. It was followed by ACK Asset Management with a $20.4 million position. Other investors bullish on the company included GMT Capital, Red Cedar Management, and Citadel Investment Group.

Seeing as US Concrete Inc (NASDAQ:USCR) has experienced a decline in interest from the entirety of the hedge funds we track, it’s safe to say that there were a few hedge funds that elected to cut their full holdings last quarter. Intriguingly, Israel Englander’s Millennium Management dumped the largest position of the “upper crust” of funds tracked by Insider Monkey, totaling an estimated $0.7 million in stock. Glenn Russell Dubin’s fund, Highbridge Capital Management, also dropped its stock, about $0.6 million worth. These bearish behaviors are intriguing to say the least, as total hedge fund interest stayed the same (this is a bearish signal in our experience).

As you can see these stocks had an average of 12.75 hedge funds with bullish positions and the average amount invested in these stocks was $123 million. That figure was $92 million in USCR’s case. Century Communities, Inc (NYSE:CCS) is the most popular stock in this table. On the other hand istar Inc (NYSE:STAR) is the least popular one with only 5 bullish hedge fund positions. US Concrete Inc (NASDAQ:USCR) is not the most popular stock in this group but hedge fund interest is still above average. Our calculations showed that top 20 most popular stocks among hedge funds returned 24.4% in 2019 through September 30th and outperformed the S&P 500 ETF (SPY) by 4 percentage points. Hedge funds were also right about betting on USCR as the stock returned 11.2% during the third quarter and outperformed the market. Hedge funds were rewarded for their relative bullishness.