Here is What Hedge Funds Think About Unum Group (UNM)

We at Insider Monkey have gone over 700 13F filings that hedge funds and prominent investors are required to file by the SEC The 13F filings show the funds’ and investors’ portfolio positions as of December 31st. In this article, we look at what those funds think of Unum Group (NYSE:UNM) based on that data.

Unum Group (NYSE:UNM) shares haven’t seen a lot of action during the third quarter. Overall, hedge fund sentiment was unchanged. The stock was in 25 hedge funds’ portfolios at the end of the fourth quarter of 2018. At the end of this article we will also compare UNM to other stocks including KAR Auction Services Inc (NYSE:KAR), Zillow Group Inc (NASDAQ:Z), and Booz Allen Hamilton Holding Corporation (NYSE:BAH) to get a better sense of its popularity.

To the average investor there are a lot of signals stock traders employ to size up their holdings. A couple of the most useful signals are hedge fund and insider trading signals. Our researchers have shown that, historically, those who follow the top picks of the top investment managers can outpace the broader indices by a significant margin (see the details here).

How have hedgies been trading Unum Group (NYSE:UNM)? 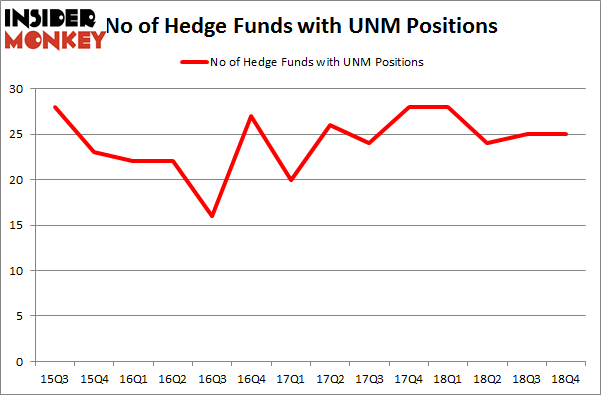 Among these funds, GLG Partners held the most valuable stake in Unum Group (NYSE:UNM), which was worth $50.1 million at the end of the third quarter. On the second spot was Balyasny Asset Management which amassed $45 million worth of shares. Moreover, Arrowstreet Capital, Millennium Management, and Two Sigma Advisors were also bullish on Unum Group (NYSE:UNM), allocating a large percentage of their portfolios to this stock.

Due to the fact that Unum Group (NYSE:UNM) has experienced declining sentiment from the aggregate hedge fund industry, it’s easy to see that there exists a select few fund managers that slashed their full holdings in the third quarter. Intriguingly, Howard Guberman’s Gruss Asset Management dropped the biggest investment of the “upper crust” of funds followed by Insider Monkey, worth about $20.5 million in stock, and Brandon Haley’s Holocene Advisors was right behind this move, as the fund dumped about $1.2 million worth. These bearish behaviors are interesting, as total hedge fund interest stayed the same (this is a bearish signal in our experience).

As you can see these stocks had an average of 23.75 hedge funds with bullish positions and the average amount invested in these stocks was $375 million. That figure was $291 million in UNM’s case. KAR Auction Services Inc (NYSE:KAR) is the most popular stock in this table. On the other hand Gerdau SA (NYSE:GGB) is the least popular one with only 12 bullish hedge fund positions. Unum Group (NYSE:UNM) is not the most popular stock in this group but hedge fund interest is still above average. This is a slightly positive signal but we’d rather spend our time researching stocks that hedge funds are piling on. Our calculations showed that top 15 most popular stocks among hedge funds returned 21.3% through April 8th and outperformed the S&P 500 ETF (SPY) by more than 5 percentage points. Hedge funds were also right about betting on UNM, though not to the same extent, as the stock returned 20.9% and outperformed the market as well.