Is Umpqua Holdings Corp (NASDAQ:UMPQ) a good place to invest some of your money right now? We can gain invaluable insight to help us answer that question by studying the investment trends of top investors, who employ world-class Ivy League graduates, who are given immense resources and industry contacts to put their financial expertise to work. The top picks of these firms have historically outperformed the market when we account for known risk factors, making them very valuable investment ideas.

Umpqua Holdings Corp (NASDAQ:UMPQ) shares haven’t seen a lot of action during the third quarter. Overall, hedge fund sentiment was unchanged. The stock was in 20 hedge funds’ portfolios at the end of December. At the end of this article we will also compare UMPQ to other stocks including Wyndham Destinations, Inc. (NYSE:WYND), Peabody Energy Corporation (NYSE:BTU), and Radian Group Inc (NYSE:RDN) to get a better sense of its popularity.

According to most market participants, hedge funds are assumed to be underperforming, outdated financial tools of yesteryear. While there are greater than 8000 funds with their doors open today, Our researchers look at the top tier of this group, approximately 750 funds. Most estimates calculate that this group of people preside over the majority of the hedge fund industry’s total capital, and by keeping an eye on their highest performing equity investments, Insider Monkey has discovered various investment strategies that have historically defeated the S&P 500 index. Insider Monkey’s flagship hedge fund strategy outstripped the S&P 500 index by nearly 5 percentage points annually since its inception in May 2014 through early November 2018. We were able to generate large returns even by identifying short candidates. Our portfolio of short stocks lost 27.5% since February 2017 (through March 12th) even though the market was up nearly 25% during the same period. We just shared a list of 6 short targets in our latest quarterly update and they are already down an average of 6% in less than a month.

What have hedge funds been doing with Umpqua Holdings Corp (NASDAQ:UMPQ)?

At Q4’s end, a total of 20 of the hedge funds tracked by Insider Monkey were long this stock, a change of 0% from one quarter earlier. Below, you can check out the change in hedge fund sentiment towards UMPQ over the last 14 quarters. With hedgies’ capital changing hands, there exists an “upper tier” of noteworthy hedge fund managers who were upping their holdings substantially (or already accumulated large positions). 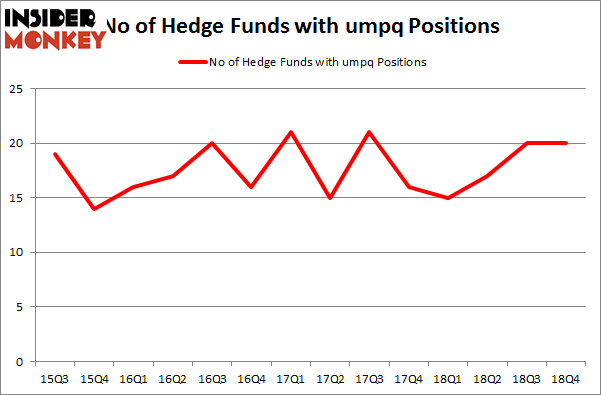 Among these funds, Millennium Management held the most valuable stake in Umpqua Holdings Corp (NASDAQ:UMPQ), which was worth $105.5 million at the end of the third quarter. On the second spot was Fisher Asset Management which amassed $56.5 million worth of shares. Moreover, Renaissance Technologies, Two Sigma Advisors, and Marshall Wace LLP were also bullish on Umpqua Holdings Corp (NASDAQ:UMPQ), allocating a large percentage of their portfolios to this stock.

Due to the fact that Umpqua Holdings Corp (NASDAQ:UMPQ) has faced declining sentiment from hedge fund managers, it’s safe to say that there exists a select few fund managers that elected to cut their full holdings by the end of the third quarter. Interestingly, Dmitry Balyasny’s Balyasny Asset Management sold off the largest investment of all the hedgies tracked by Insider Monkey, totaling close to $7.5 million in stock, and Mark Lee’s Forest Hill Capital was right behind this move, as the fund said goodbye to about $6.3 million worth. These transactions are intriguing to say the least, as aggregate hedge fund interest stayed the same (this is a bearish signal in our experience).

As you can see these stocks had an average of 26.25 hedge funds with bullish positions and the average amount invested in these stocks was $707 million. That figure was $284 million in UMPQ’s case. Peabody Energy Corporation (NYSE:BTU) is the most popular stock in this table. On the other hand Wyndham Destinations, Inc. (NYSE:WYND) is the least popular one with only 20 bullish hedge fund positions. Compared to these stocks Umpqua Holdings Corp (NASDAQ:UMPQ) is even less popular than WYND. Hedge funds dodged a bullet by taking a bearish stance towards UMPQ. Our calculations showed that the top 15 most popular hedge fund stocks returned 24.2% through April 22nd and outperformed the S&P 500 ETF (SPY) by more than 7 percentage points. Unfortunately UMPQ wasn’t nearly as popular as these 15 stock (hedge fund sentiment was very bearish); UMPQ investors were disappointed as the stock returned 6.6% and underperformed the market. If you are interested in investing in large cap stocks with huge upside potential, you should check out the top 15 most popular stocks) among hedge funds as 13 of these stocks already outperformed the market this year.