Here is What Hedge Funds Think About Tyson Foods (TSN)

The government requires hedge funds and wealthy investors that crossed the $100 million equity holdings threshold are required to file a report that shows their positions at the end of every quarter. Even though it isn’t the intention, these filings level the playing field for ordinary investors. The latest round of 13F filings disclosed the funds’ positions on December 31. We at Insider Monkey have made an extensive database of nearly 750 of those elite funds and prominent investors’ filings. In this article, we analyze how these elite funds and prominent investors traded Tyson Foods, Inc. (NYSE:TSN) based on those filings.

Tyson Foods, Inc. (NYSE:TSN) has experienced a decrease in hedge fund interest in recent months. Our calculations also showed that TSN isn’t among the 30 most popular stocks among hedge funds.

In today’s marketplace there are a lot of metrics shareholders use to value stocks. A couple of the less utilized metrics are hedge fund and insider trading activity. Our researchers have shown that, historically, those who follow the best picks of the top fund managers can outperform the broader indices by a healthy amount (see the details here). 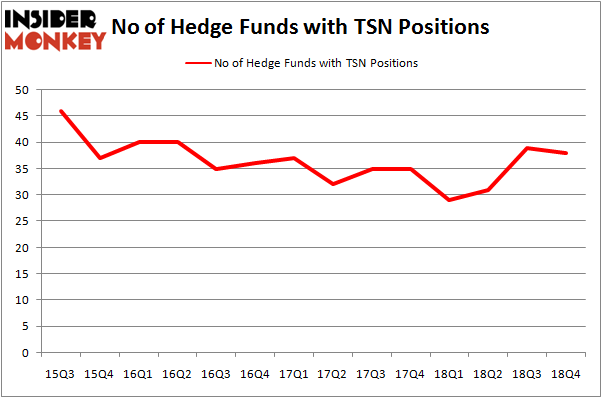 The largest stake in Tyson Foods, Inc. (NYSE:TSN) was held by AQR Capital Management, which reported holding $312.7 million worth of stock at the end of September. It was followed by Iridian Asset Management with a $170.4 million position. Other investors bullish on the company included Millennium Management, Arrowstreet Capital, and GLG Partners.

Since Tyson Foods, Inc. (NYSE:TSN) has witnessed bearish sentiment from the smart money, it’s easy to see that there lies a certain “tier” of hedgies that elected to cut their full holdings heading into Q3. At the top of the heap, Mike Masters’s Masters Capital Management dropped the biggest stake of the 700 funds followed by Insider Monkey, comprising an estimated $29.8 million in stock, and Paul Marshall and Ian Wace’s Marshall Wace LLP was right behind this move, as the fund dropped about $14.1 million worth. These moves are interesting, as aggregate hedge fund interest dropped by 1 funds heading into Q3.

As you can see these stocks had an average of 24.5 hedge funds with bullish positions and the average amount invested in these stocks was $1352 million. That figure was $1426 million in TSN’s case. FirstEnergy Corp. (NYSE:FE) is the most popular stock in this table. On the other hand Korea Electric Power Corporation (NYSE:KEP) is the least popular one with only 9 bullish hedge fund positions. Tyson Foods, Inc. (NYSE:TSN) is not the most popular stock in this group but hedge fund interest is still above average. Our calculations showed that top 15 most popular stocks among hedge funds returned 19.7% through March 15th and outperformed the S&P 500 ETF (SPY) by 6.6 percentage points. Hedge funds were also right about betting on Tyson Foods as the stock returned 22.9% and outperformed the market as well.