Is Theravance Biopharma Inc (NASDAQ:TBPH) a good investment now? The smart money is taking a pessimistic view. The number of bullish hedge fund bets were cut by 1 in recent months. Our calculations also showed that TBPH isn’t among the 30 most popular stocks among hedge funds (see the video below).

What does smart money think about Theravance Biopharma Inc (NASDAQ:TBPH)?

At the end of the second quarter, a total of 8 of the hedge funds tracked by Insider Monkey were long this stock, a change of -11% from one quarter earlier. Below, you can check out the change in hedge fund sentiment towards TBPH over the last 16 quarters. With hedge funds’ capital changing hands, there exists a few notable hedge fund managers who were boosting their holdings considerably (or already accumulated large positions). 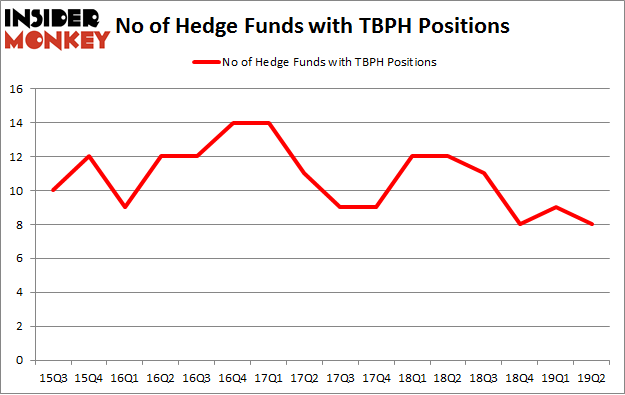 The largest stake in Theravance Biopharma Inc (NASDAQ:TBPH) was held by Woodford Investment Management, which reported holding $198.6 million worth of stock at the end of March. It was followed by Baupost Group with a $152 million position. Other investors bullish on the company included Rock Springs Capital Management, Royce & Associates, and Clearline Capital.

Judging by the fact that Theravance Biopharma Inc (NASDAQ:TBPH) has faced falling interest from hedge fund managers, it’s safe to say that there were a few money managers that elected to cut their entire stakes last quarter. Interestingly, David Costen Haley’s HBK Investments dropped the biggest stake of the 750 funds watched by Insider Monkey, valued at about $0.6 million in stock. Israel Englander’s fund, Millennium Management, also dumped its stock, about $0.4 million worth. These bearish behaviors are interesting, as aggregate hedge fund interest was cut by 1 funds last quarter.

As you can see these stocks had an average of 10.75 hedge funds with bullish positions and the average amount invested in these stocks was $85 million. That figure was $362 million in TBPH’s case. Liberty Tripadvisor Holdings Inc (NASDAQ:LTRPA) is the most popular stock in this table. On the other hand Ballard Power Systems Inc. (NASDAQ:BLDP) is the least popular one with only 4 bullish hedge fund positions. Theravance Biopharma Inc (NASDAQ:TBPH) is not the least popular stock in this group but hedge fund interest is still below average. Our calculations showed that top 20 most popular stocks among hedge funds returned 24.4% in 2019 through September 30th and outperformed the S&P 500 ETF (SPY) by 4 percentage points. A small number of hedge funds were also right about betting on TBPH as the stock returned 19.3% during the same time frame and outperformed the market by an even larger margin.