We at Insider Monkey have gone over 730 13F filings that hedge funds and prominent investors are required to file by the SEC The 13F filings show the funds’ and investors’ portfolio positions as of June 28th. In this article, we look at what those funds think of The Charles Schwab Corp (NYSE:SCHW) based on that data.

The Charles Schwab Corp (NYSE:SCHW) has seen a decrease in activity from the world’s largest hedge funds in recent months. Our calculations also showed that SCHW isn’t among the 30 most popular stocks among hedge funds (see the video below). 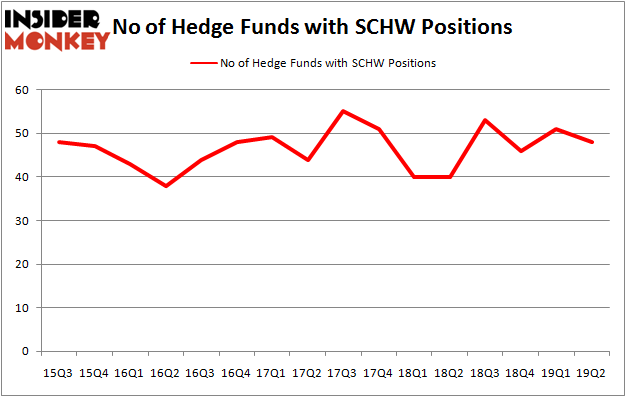 Unlike some fund managers who are betting on Dow reaching 40000 in a year, our long-short investment strategy doesn’t rely on bull markets to deliver double digit returns. We only rely on hedge fund buy/sell signals. We’re going to review the latest hedge fund action surrounding The Charles Schwab Corp (NYSE:SCHW).

What have hedge funds been doing with The Charles Schwab Corp (NYSE:SCHW)?

Heading into the third quarter of 2019, a total of 48 of the hedge funds tracked by Insider Monkey held long positions in this stock, a change of -6% from one quarter earlier. The graph below displays the number of hedge funds with bullish position in SCHW over the last 16 quarters. With the smart money’s capital changing hands, there exists a few noteworthy hedge fund managers who were boosting their holdings meaningfully (or already accumulated large positions).

More specifically, Generation Investment Management was the largest shareholder of The Charles Schwab Corp (NYSE:SCHW), with a stake worth $839.9 million reported as of the end of March. Trailing Generation Investment Management was Route One Investment Company, which amassed a stake valued at $486.1 million. Eminence Capital, Theleme Partners, and Brave Warrior Capital were also very fond of the stock, giving the stock large weights in their portfolios.

Judging by the fact that The Charles Schwab Corp (NYSE:SCHW) has experienced falling interest from the aggregate hedge fund industry, we can see that there is a sect of hedgies that decided to sell off their full holdings last quarter. It’s worth mentioning that Lou Simpson’s SQ Advisors cut the biggest investment of all the hedgies monitored by Insider Monkey, comprising an estimated $126.1 million in stock. Lee Ainslie’s fund, Maverick Capital, also sold off its stock, about $99.4 million worth. These transactions are interesting, as total hedge fund interest fell by 3 funds last quarter.

As you can see these stocks had an average of 52.75 hedge funds with bullish positions and the average amount invested in these stocks was $3793 million. That figure was $2698 million in SCHW’s case. ServiceNow Inc (NYSE:NOW) is the most popular stock in this table. On the other hand General Dynamics Corporation (NYSE:GD) is the least popular one with only 40 bullish hedge fund positions. The Charles Schwab Corp (NYSE:SCHW) is not the least popular stock in this group but hedge fund interest is still below average. Our calculations showed that top 20 most popular stocks among hedge funds returned 24.4% in 2019 through September 30th and outperformed the S&P 500 ETF (SPY) by 4 percentage points. A small number of hedge funds were also right about betting on SCHW, though not to the same extent, as the stock returned 4.6% during the third quarter and outperformed the market.