Amid an overall market correction, many stocks that smart money investors were collectively bullish on tanked during the fourth quarter. Among them, Amazon and Netflix ranked among the top 30 picks and both lost around 20%. Facebook, which was the second most popular stock, lost 14% amid uncertainty regarding the interest rates and tech valuations. Nevertheless, our research shows that most of the stocks that smart money likes historically generate strong risk-adjusted returns. This is why following the smart money sentiment is a useful tool for identifying the next stock to invest in.

TD Ameritrade Holding Corp. (NASDAQ:AMTD) has experienced a large decrease in support from the world’s most elite money managers of late. In fact, it was one of 10 Stocks Hedge Funds Ditched in Q3 Just Before the Market Crushed Them. That sell-off ensured it came nowhere near landing on the list of the 30 most popular stocks among hedge funds as well.

While conducting research for our write-up, we came across RiverPark Long/Short Opportunity Fund’s Quarterly Letter, which contains an opinion on the travel company. We bring you that portion of the report:

“TD Ameritrade shares advanced strongly boosted by continued strong client inflows, elevated trading volumes, earnings accretion from tax reform, as well as the potential for future interest rate increases. A volatile market environment is particularly beneficial to AMTD as the company reported 726,000 trades per day on average, up 49% year-over-year (including the newly acquired Scottrade clients). The company also reported $26.5 billion in net new client assets (a 9% annualized growth rate), which continues to bode well for trading and asset management fee growth in the quarters to come. We continue to project double-digit revenue growth and 20% earnings growth per year for AMTD over the coming years driven by strong asset gathering and disciplined expense control. These rates of growth could be substantially higher should the pace of Fed rate hikes accelerate.”

Our readers will be interested to know that Peter J. deSilva, President of Retail at TD Ameritrade Holding Corp., was responsible for the last major insider purchase of the company’s common stock. The executive snapped up 5,000 shares for $56.73 per share earlier on in 2018. The shares are currently trading at $47.93, so the investment has not turned a profit as of yet.

What does the smart money think about TD Ameritrade Holding Corp. (NASDAQ:AMTD)?

At Q3’s end, a total of 18 of the hedge funds tracked by Insider Monkey held long positions in this stock, a 36% tumble from the second quarter of 2018. By comparison, 33 hedge funds held shares or bullish call options in AMTD heading into this year. With hedgies’ positions undergoing their usual ebb and flow, there exists an “upper tier” of notable hedge fund managers who were boosting their holdings substantially (or already accumulated large positions). 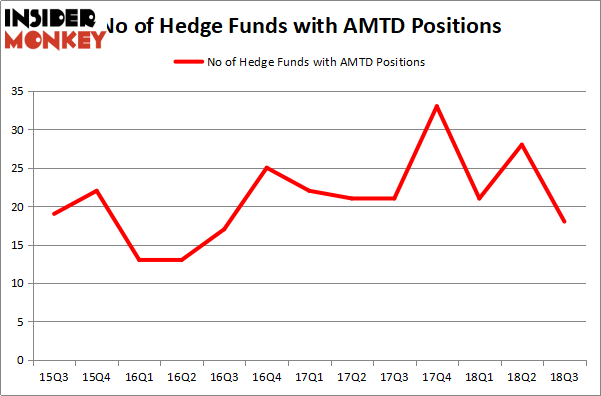 The largest stake in TD Ameritrade Holding Corp. (NASDAQ:AMTD) was held by Citadel Investment Group, which reported holding $164.4 million worth of stock at the end of September. It was followed by Akre Capital Management with a $156.8 million position. Other investors bullish on the company included Millennium Management, Point72 Asset Management, and Crescent Park Management.

Judging by the fact that TD Ameritrade Holding Corp. (NASDAQ:AMTD) has witnessed declining sentiment from hedge fund managers, it’s easy to see that there exist a select few hedgies that decided to sell off their full holdings by the end of the third quarter. At the top of the heap, Peter Seuss’s Prana Capital Management said goodbye to the largest position of all the hedgies tracked by Insider Monkey, valued at an estimated $16.4 million in stock, and Malcolm Fairbairn’s Ascend Capital was right behind this move, as the fund dropped about $11.2 million worth. These bearish behaviors are important to note, as total hedge fund interest was cut by 10 funds by the end of the third quarter.

As you can see these stocks had an average of 53 hedge funds with bullish positions and the average amount invested in these stocks was $3.65 billion. That figure was $575 million in AMTD’s case. NXP Semiconductors NV (NASDAQ:NXPI) is the most popular stock in this table. On the other hand, NetEase, Inc (NASDAQ:NTES) is the least popular one with only 26 bullish hedge fund positions. Compared to these stocks TD Ameritrade Holding Corp. (NASDAQ:AMTD) is even less popular than NTES. Considering that hedge funds aren’t fond of this stock in relation to other companies analyzed in this article, it may be a good idea to analyze it in detail and understand why the smart money isn’t behind this stock.

Should You Buy The Hanover Insurance Group, Inc. (THG)?
Monthly Newsletter Strategy
Download a free copy of our newsletter and see the details inside!
Hedge Fund Resource Center
Related News
10 Stocks Hedge Funds Ditched in Q3 Just Before the Market Crushed Them Ex-CEO of TD Ameritrade Sells Shares, Co-Founder of Chipmaker Offloads Shares, Plus Insider Buying at Other Companies Is TD Ameritrade Holding Corp. (AMTD) Worthy of Your Portfolio? Influential Insiders at Well-Known Freight Trucking Company and Ultratech Inc. (UTEK) Discard Shares, Plus Insider Buying at Other Companies Ophthotech Corp (OPHT), First Solar, Inc. (FSLR), and More: Analysts Had This to Say About Some of The Week’s Top Movers What is Happening to These Stocks on Wednesday? Is TD Ameritrade Holding Corp. (AMTD) A Good Stock To Buy? 11 Countries With The Worst Modern Music In The World The Top 5 Robo Advisor Apps of 2018 Five Reasons You Need a Day-Trading Mentor
Billionaire Hedge Funds