Here is What Hedge Funds Think About Symantec Corporation (SYMC)

While the market driven by short-term sentiment influenced by uncertainty regarding the future of the interest rate environment in the US, declining oil prices and the trade war with China, many smart money investors kept their optimism regarding the current bull run in the fourth quarter, while still hedging many of their long positions. However, as we know, big investors usually buy stocks with strong fundamentals, which is why we believe we can profit from imitating them. In this article, we are going to take a look at the smart money sentiment surrounding Symantec Corporation (NASDAQ:SYMC).

Symantec Corporation (NASDAQ:SYMC) shares haven’t seen a lot of action during the third quarter. Overall, hedge fund sentiment was unchanged. The stock was in 33 hedge funds’ portfolios at the end of December. At the end of this article we will also compare SYMC to other stocks including Liberty Media Corporation (NASDAQ:LSXMA), Celanese Corporation (NYSE:CE), and Fortinet Inc (NASDAQ:FTNT) to get a better sense of its popularity. 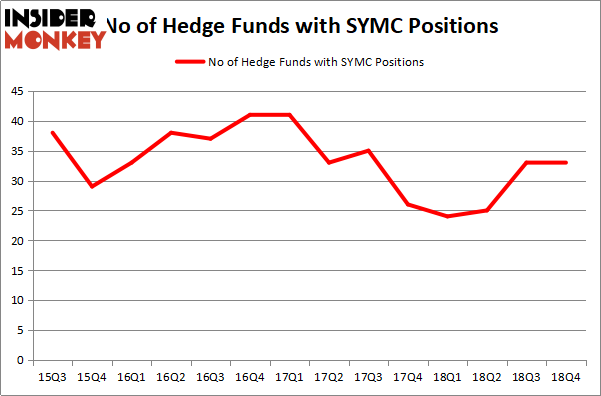 More specifically, Starboard Value LP was the largest shareholder of Symantec Corporation (NASDAQ:SYMC), with a stake worth $463 million reported as of the end of September. Trailing Starboard Value LP was AQR Capital Management, which amassed a stake valued at $238.3 million. D E Shaw, Orbis Investment Management, and Citadel Investment Group were also very fond of the stock, giving the stock large weights in their portfolios.

Due to the fact that Symantec Corporation (NASDAQ:SYMC) has witnessed a decline in interest from the aggregate hedge fund industry, it’s safe to say that there is a sect of hedgies that decided to sell off their positions entirely heading into Q3. It’s worth mentioning that Larry Robbins’s Glenview Capital said goodbye to the biggest stake of the “upper crust” of funds followed by Insider Monkey, comprising close to $133.7 million in call options, and Leon Shaulov’s Maplelane Capital was right behind this move, as the fund cut about $28.3 million worth. These moves are intriguing to say the least, as aggregate hedge fund interest stayed the same (this is a bearish signal in our experience).

As you can see these stocks had an average of 34 hedge funds with bullish positions and the average amount invested in these stocks was $1240 million. That figure was $1274 million in SYMC’s case. The Liberty SiriusXM Group (NASDAQ:LSXMA) is the most popular stock in this table. On the other hand Celanese Corporation (NYSE:CE) is the least popular one with only 26 bullish hedge fund positions. Symantec Corporation (NASDAQ:SYMC) is not the least popular stock in this group but hedge fund interest is still below average. This is a slightly negative signal and we’d rather spend our time researching stocks that hedge funds are piling on. Our calculations showed that top 15 most popular stocks among hedge funds returned 19.7% through March 15th and outperformed the S&P 500 ETF (SPY) by 6.6 percentage points. Hedge funds were also right about betting on SYMC as the stock returned 22.1% and outperformed the market as well. You can see the entire list of these shrewd hedge funds here.