After several tireless days we have finished crunching the numbers from nearly 750 13F filings issued by the elite hedge funds and other investment firms that we track at Insider Monkey, which disclosed those firms’ equity portfolios as of June 28. The results of that effort will be put on display in this article, as we share valuable insight into the smart money sentiment towards Stanley Black & Decker, Inc. (NYSE:SWK).

Stanley Black & Decker, Inc. (NYSE:SWK) was in 27 hedge funds’ portfolios at the end of June. SWK investors should pay attention to a decrease in hedge fund sentiment lately. There were 31 hedge funds in our database with SWK positions at the end of the previous quarter. Our calculations also showed that SWK isn’t among the 30 most popular stocks among hedge funds (see the video below). 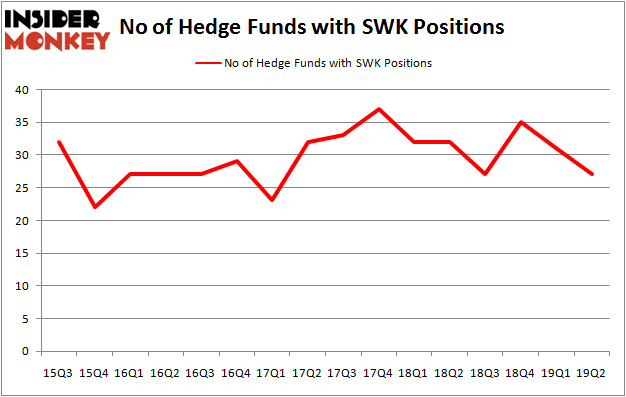 Unlike some fund managers who are betting on Dow reaching 40000 in a year, our long-short investment strategy doesn’t rely on bull markets to deliver double digit returns. We only rely on hedge fund buy/sell signals. We’re going to take a look at the key hedge fund action regarding Stanley Black & Decker, Inc. (NYSE:SWK).

At the end of the second quarter, a total of 27 of the hedge funds tracked by Insider Monkey were bullish on this stock, a change of -13% from the first quarter of 2019. Below, you can check out the change in hedge fund sentiment towards SWK over the last 16 quarters. With hedge funds’ positions undergoing their usual ebb and flow, there exists a few key hedge fund managers who were adding to their holdings substantially (or already accumulated large positions).

The largest stake in Stanley Black & Decker, Inc. (NYSE:SWK) was held by Pzena Investment Management, which reported holding $347.8 million worth of stock at the end of March. It was followed by Citadel Investment Group with a $312.9 million position. Other investors bullish on the company included Holocene Advisors, Ariel Investments, and D E Shaw.

Since Stanley Black & Decker, Inc. (NYSE:SWK) has witnessed a decline in interest from the entirety of the hedge funds we track, logic holds that there lies a certain “tier” of hedgies that decided to sell off their positions entirely last quarter. At the top of the heap, Zach Schreiber’s Point State Capital dropped the biggest stake of the “upper crust” of funds watched by Insider Monkey, totaling about $67.9 million in stock. Alexander Mitchell’s fund, Scopus Asset Management, also sold off its stock, about $25.9 million worth. These transactions are intriguing to say the least, as aggregate hedge fund interest was cut by 4 funds last quarter.

As you can see these stocks had an average of 21.25 hedge funds with bullish positions and the average amount invested in these stocks was $632 million. That figure was $1068 million in SWK’s case. Edison International (NYSE:EIX) is the most popular stock in this table. On the other hand Rogers Communications Inc. (NYSE:RCI) is the least popular one with only 14 bullish hedge fund positions. Stanley Black & Decker, Inc. (NYSE:SWK) is not the most popular stock in this group but hedge fund interest is still above average. This is a slightly positive signal but we’d rather spend our time researching stocks that hedge funds are piling on. Our calculations showed that top 20 most popular stocks among hedge funds returned 24.4% in 2019 through September 30th and outperformed the S&P 500 ETF (SPY) by 4 percentage points. Unfortunately SWK wasn’t nearly as popular as these 20 stocks and hedge funds that were betting on SWK were disappointed as the stock returned 0.4% during the third quarter and underperformed the market. If you are interested in investing in large cap stocks with huge upside potential, you should check out the top 20 most popular stocks among hedge funds as many of these stocks already outperformed the market so far this year.