South State Corporation (NASDAQ:SSB) was in 14 hedge funds’ portfolios at the end of June. SSB investors should be aware of an increase in hedge fund interest of late. There were 13 hedge funds in our database with SSB positions at the end of the previous quarter. Our calculations also showed that SSB isn’t among the 30 most popular stocks among hedge funds (view video below).

What have hedge funds been doing with South State Corporation (NASDAQ:SSB)?

Heading into the third quarter of 2019, a total of 14 of the hedge funds tracked by Insider Monkey held long positions in this stock, a change of 8% from one quarter earlier. On the other hand, there were a total of 16 hedge funds with a bullish position in SSB a year ago. With the smart money’s sentiment swirling, there exists a few notable hedge fund managers who were adding to their holdings meaningfully (or already accumulated large positions). 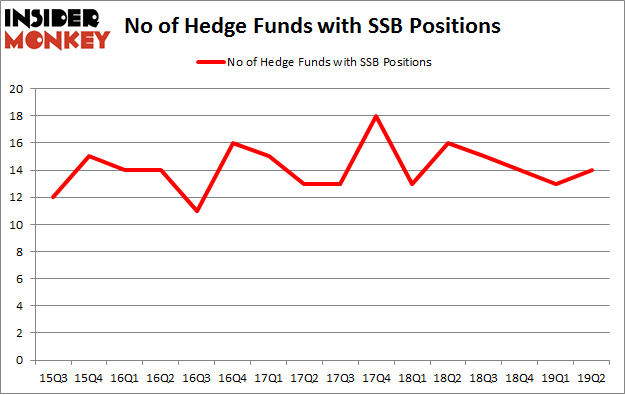 According to publicly available hedge fund and institutional investor holdings data compiled by Insider Monkey, Mark Lee’s Forest Hill Capital has the most valuable position in South State Corporation (NASDAQ:SSB), worth close to $6.3 million, amounting to 2.2% of its total 13F portfolio. The second largest stake is held by Basswood Capital, managed by Matthew Lindenbaum, which holds a $3.9 million position; the fund has 0.2% of its 13F portfolio invested in the stock. Remaining hedge funds and institutional investors are Renaissance Technologies, Joe Huber’s Huber Capital Management and Bernard Horn’s Polaris Capital Management.

As you can see these stocks had an average of 19.5 hedge funds with bullish positions and the average amount invested in these stocks was $325 million. That figure was $20 million in SSB’s case. Trinity Industries, Inc. (NYSE:TRN) is the most popular stock in this table. On the other hand Lions Gate Entertainment Corp. (NYSE:LGF-B) is the least popular one with only 15 bullish hedge fund positions. Compared to these stocks South State Corporation (NASDAQ:SSB) is even less popular than LGF-B. Our calculations showed that top 20 most popular stocks among hedge funds returned 24.4% in 2019 through September 30th and outperformed the S&P 500 ETF (SPY) by 4 percentage points. A small number of hedge funds were also right about betting on SSB, though not to the same extent, as the stock returned 2.8% during the third quarter and outperformed the market as well.