Here is What Hedge Funds Think About SkyWest, Inc. (SKYW)

A market correction in the fourth quarter, spurred by a number of global macroeconomic concerns and rising interest rates ended up having a negative impact on the markets and many hedge funds as a result. The stocks of smaller companies were especially hard hit during this time as investors fled to investments seen as being safer. This is evident in the fact that the Russell 2000 ETF underperformed the S&P 500 ETF by 4 percentage points during the first half of the fourth quarter. We also received indications that hedge funds were trimming their positions amid the market volatility and uncertainty, and given their greater inclination towards smaller cap stocks than other investors, it follows that a stronger sell-off occurred in those stocks. Let’s study the hedge fund sentiment to see how those concerns affected their ownership of SkyWest, Inc. (NASDAQ:SKYW) during the quarter.

Is SkyWest, Inc. (NASDAQ:SKYW) a bargain? Prominent investors are buying. The number of bullish hedge fund positions improved by 2 lately. Our calculations also showed that SKYW isn’t among the 30 most popular stocks among hedge funds.

To the average investor there are several gauges shareholders can use to assess publicly traded companies. Some of the most underrated gauges are hedge fund and insider trading moves. Our experts have shown that, historically, those who follow the top picks of the best hedge fund managers can trounce their index-focused peers by a very impressive amount (see the details here).

What have hedge funds been doing with SkyWest, Inc. (NASDAQ:SKYW)? 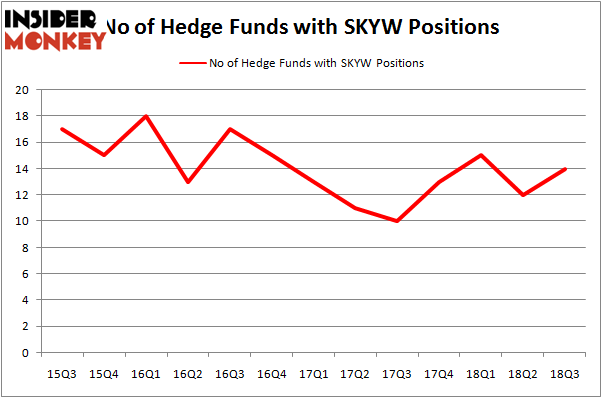 According to publicly available hedge fund and institutional investor holdings data compiled by Insider Monkey, Jim Simons’s Renaissance Technologies has the largest position in SkyWest, Inc. (NASDAQ:SKYW), worth close to $137.9 million, comprising 0.1% of its total 13F portfolio. On Renaissance Technologies’s heels is AQR Capital Management, managed by Cliff Asness, which holds a $5 million position; the fund has less than 0.1%% of its 13F portfolio invested in the stock. Some other peers that are bullish encompass Ken Griffin’s Citadel Investment Group, Paul Marshall and Ian Wace’s Marshall Wace LLP and Richard Driehaus’s Driehaus Capital.

With a general bullishness amongst the heavyweights, specific money managers were leading the bulls’ herd. Marshall Wace LLP, managed by Paul Marshall and Ian Wace, established the most outsized position in SkyWest, Inc. (NASDAQ:SKYW). Marshall Wace LLP had $3.4 million invested in the company at the end of the quarter. Roger Ibbotson’s Zebra Capital Management also initiated a $0.5 million position during the quarter. The following funds were also among the new SKYW investors: Bruce Kovner’s Caxton Associates LP and Frederick DiSanto’s Ancora Advisors.

As you can see these stocks had an average of 17.25 hedge funds with bullish positions and the average amount invested in these stocks was $371 million. That figure was $158 million in SKYW’s case. CONSOL Energy Inc. (NYSE:CNX) is the most popular stock in this table. On the other hand BlackLine, Inc. (NASDAQ:BL) is the least popular one with only 13 bullish hedge fund positions. SkyWest, Inc. (NASDAQ:SKYW) is not the least popular stock in this group but hedge fund interest is still below average. This is a slightly negative signal and we’d rather spend our time researching stocks that hedge funds are piling on. In this regard CNX might be a better candidate to consider a long position.