During the first half of the fourth quarter the Russell 2000 ETF (IWM) lagged the larger S&P 500 ETF (SPY) by about 4 percentage points as investors worried over the possible ramifications of rising interest rates. The hedge funds and institutional investors we track typically invest more in smaller-cap stocks than an average investor (i.e. only 298 S&P 500 constituents were among the 500 most popular stocks among hedge funds), and we have seen data that shows those funds paring back their overall exposure. Those funds cutting positions in small-caps is one reason why volatility has increased. In the following paragraphs, we take a closer look at what hedge funds and prominent investors think of Skyline Corporation (NYSE:SKY) and see how the stock is affected by the recent hedge fund activity.

Skyline Corporation (NYSE:SKY) was in 23 hedge funds’ portfolios at the end of September. SKY investors should be aware of an increase in hedge fund interest lately. There were 15 hedge funds in our database with SKY holdings at the end of the previous quarter. Our calculations also showed that SKY isn’t among the 30 most popular stocks among hedge funds.

According to most stock holders, hedge funds are assumed to be slow, old financial vehicles of yesteryear. While there are over 8,000 funds with their doors open today, Our researchers look at the upper echelon of this club, approximately 700 funds. Most estimates calculate that this group of people direct most of the smart money’s total asset base, and by tailing their first-class picks, Insider Monkey has identified a number of investment strategies that have historically outstripped the broader indices. Insider Monkey’s flagship hedge fund strategy surpassed the S&P 500 index by 6 percentage points annually since its inception in May 2014 through early November 2018. We were able to generate large returns even by identifying short candidates. Our portfolio of short stocks lost 24% since February 2017 (through December 3rd) even though the market was up nearly 23% during the same period. We just shared a list of 11 short targets in our latest quarterly update.

When collecting data for our article, we came across Artko Capital’s letter for the fourth calendar quarter of 2017. The fund has a position in the Elkhart, Indiana-based company and had this to say regarding the company in this report:

“We added a 2% position in this sub-$100 million market capitalization producer of manufactured homes in the last quarter of 2017. Our original thesis behind this investment was that there is pent-up industry demand for manufactured homes in the United States, buoyed by low-interest rates; a significant product upgrade that is leaving behind the stigma of “trailer home living”; and new demand from Federal Emergency Management Agency (FEMA) post a devastating hurricane season. The company had significant insider ownership, a clean balance sheet, and was trading below 10x our forecasted forward earnings, which we expected to double within the next few years. In early January 2018, Skyline announced a reverse merger with Champion Enterprises, the second largest factory home player in the United States behind Warrant Buffett’s Clayton Enterprises.”

At the end of the third quarter, a total of 23 of the hedge funds tracked by Insider Monkey held long positions in this stock, a change of 53% from the second quarter of 2018. By comparison, 5 hedge funds held shares or bullish call options in SKY heading into this year. So, let’s examine which hedge funds were among the top holders of the stock and which hedge funds were making big moves. 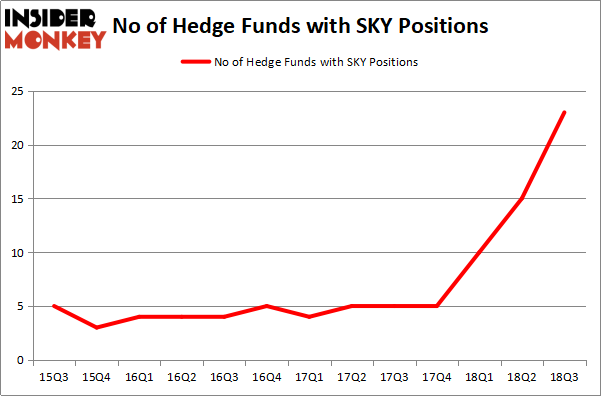 The largest stake in Skyline Corporation (NYSE:SKY) was held by MAK Capital One, which reported holding $191.1 million worth of stock at the end of September. It was followed by Centerbridge Partners with a $188.6 million position. Other investors bullish on the company included Tontine Asset Management, Driehaus Capital, and Highland Capital Management.

Consequently, specific money managers have been driving this bullishness. Brant Point Investment Management, managed by Ira Unschuld, initiated the biggest position in Skyline Corporation (NYSE:SKY). Brant Point Investment Management had $7.8 million invested in the company at the end of the quarter. Mark Broach’s Manatuck Hill Partners also made a $7.8 million investment in the stock during the quarter. The following funds were also among the new SKY investors: Benjamin A. Smith’s Laurion Capital Management, Philip Hempleman’s Ardsley Partners, and Gregg Moskowitz’s Interval Partners.

Let’s check out hedge fund activity in other stocks – not necessarily in the same industry as Skyline Corporation (NYSE:SKY) but similarly valued. We will take a look at Sonos, Inc. (NASDAQ:SONO), Virtusa Corporation (NASDAQ:VRTU), WestAmerica Bancorp. (NASDAQ:WABC), and Aimmune Therapeutics Inc (NASDAQ:AIMT). This group of stocks’ market caps are closest to SKY’s market cap.

As you can see these stocks had an average of 12 hedge funds with bullish positions and the average amount invested in these stocks was $71 million. That figure was $539 million in SKY’s case. Aimmune Therapeutics Inc (NASDAQ:AIMT) is the most popular stock in this table. On the other hand WestAmerica Bancorp. (NASDAQ:WABC) is the least popular one with only 4 bullish hedge fund positions. Compared to these stocks Skyline Corporation (NYSE:SKY) is more popular among hedge funds. Considering that hedge funds are fond of this stock in relation to its market cap peers, it may be a good idea to analyze it in detail and potentially include it in your portfolio.