Here is What Hedge Funds Think About Sabre Corporation (SABR)

Sabre Corporation (NASDAQ:SABR) has seen an increase in activity from the world’s largest hedge funds recently. SABR was in 31 hedge funds’ portfolios at the end of September. There were 25 hedge funds in our database with SABR positions at the end of the previous quarter. Our calculations also showed that SABR isn’t among the 30 most popular stocks among hedge funds.

At the end of the third quarter, a total of 31 of the hedge funds tracked by Insider Monkey were bullish on this stock, a change of 24% from the second quarter of 2018. The graph below displays the number of hedge funds with bullish position in SABR over the last 13 quarters. With the smart money’s capital changing hands, there exists an “upper tier” of noteworthy hedge fund managers who were adding to their stakes substantially (or already accumulated large positions). 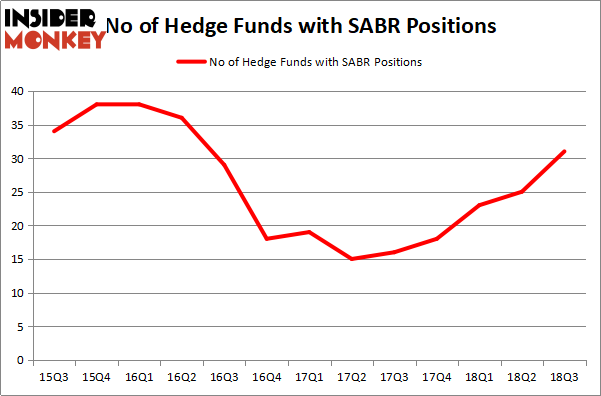 More specifically, Silver Lake Partners was the largest shareholder of Sabre Corporation (NASDAQ:SABR), with a stake worth $248.5 million reported as of the end of September. Trailing Silver Lake Partners was Millennium Management, which amassed a stake valued at $59 million. D E Shaw, Two Sigma Advisors, and MD Sass were also very fond of the stock, giving the stock large weights in their portfolios.

As industrywide interest jumped, specific money managers have been driving this bullishness. Elliott Management, managed by Paul Singer, assembled the biggest position in Sabre Corporation (NASDAQ:SABR). Elliott Management had $15.4 million invested in the company at the end of the quarter. Glenn Russell Dubin’s Highbridge Capital Management also made a $8.5 million investment in the stock during the quarter. The following funds were also among the new SABR investors: Paul Marshall and Ian Wace’s Marshall Wace LLP, Andre F. Perold’s HighVista Strategies, and David Andre and Astro Teller’s Cerebellum Capital.

As you can see these stocks had an average of 17.5 hedge funds with bullish positions and the average amount invested in these stocks was $237 million. That figure was $606 million in SABR’s case. PRA Health Sciences Inc (NASDAQ:PRAH) is the most popular stock in this table. On the other hand Flowserve Corporation (NYSE:FLS) is the least popular one with only 13 bullish hedge fund positions. Compared to these stocks Sabre Corporation (NASDAQ:SABR) is more popular among hedge funds. Considering that hedge funds are fond of this stock in relation to its market cap peers, it may be a good idea to analyze it in detail and potentially include it in your portfolio.