Here is What Hedge Funds Think About Rayonier Inc. (RYN)

It was a rough fourth quarter for many hedge funds, which were naturally unable to overcome the big dip in the broad market, as the S&P 500 fell by about 4.8% during 2018 and average hedge fund losing about 1%. The Russell 2000, composed of smaller companies, performed even worse, trailing the S&P by more than 6 percentage points, as investors fled less-known quantities for safe havens. Luckily hedge funds were shifting their holdings into large-cap stocks. The 20 most popular hedge fund stocks actually generated an average return of 24.4% during the first 9 months of 2019 and outperformed the S&P 500 ETF by 4 percentage points. We are done processing the latest 13f filings and in this article we will study how hedge fund sentiment towards Rayonier Inc. (NYSE:RYN) changed during the first quarter.

Rayonier Inc. (NYSE:RYN) shares haven’t seen a lot of action during the second quarter. Overall, hedge fund sentiment was unchanged. The stock was in 14 hedge funds’ portfolios at the end of June. At the end of this article we will also compare RYN to other stocks including Penske Automotive Group, Inc. (NYSE:PAG), Plains GP Holdings LP (NYSE:PAGP), and MasTec, Inc. (NYSE:MTZ) to get a better sense of its popularity. Our calculations also showed that RYN isn’t among the 30 most popular stocks among hedge funds (view the video below).

Today there are tons of signals stock traders can use to grade their stock investments. A duo of the less utilized signals are hedge fund and insider trading sentiment. Our researchers have shown that, historically, those who follow the best picks of the top hedge fund managers can trounce the S&P 500 by a solid margin (see the details here). 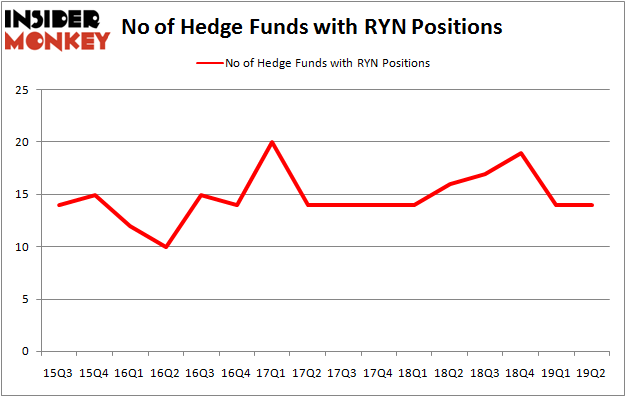 Unlike former hedge manager, Dr. Steve Sjuggerud, who is convinced Dow will soar past 40000, our long-short investment strategy doesn’t rely on bull markets to deliver double digit returns. We only rely on hedge fund buy/sell signals. Let’s take a gander at the key hedge fund action regarding Rayonier Inc. (NYSE:RYN).

Heading into the third quarter of 2019, a total of 14 of the hedge funds tracked by Insider Monkey were long this stock, a change of 0% from the first quarter of 2019. The graph below displays the number of hedge funds with bullish position in RYN over the last 16 quarters. With the smart money’s positions undergoing their usual ebb and flow, there exists an “upper tier” of notable hedge fund managers who were increasing their stakes significantly (or already accumulated large positions).

Among these funds, Renaissance Technologies held the most valuable stake in Rayonier Inc. (NYSE:RYN), which was worth $121.7 million at the end of the second quarter. On the second spot was Impax Asset Management which amassed $101.5 million worth of shares. Moreover, Third Avenue Management, Point72 Asset Management, and Millennium Management were also bullish on Rayonier Inc. (NYSE:RYN), allocating a large percentage of their portfolios to this stock.

Seeing as Rayonier Inc. (NYSE:RYN) has witnessed a decline in interest from hedge fund managers, we can see that there was a specific group of hedge funds that decided to sell off their entire stakes by the end of the second quarter. Intriguingly, Peter Rathjens, Bruce Clarke and John Campbell’s Arrowstreet Capital dropped the largest position of all the hedgies watched by Insider Monkey, worth about $4.3 million in stock. Richard Driehaus’s fund, Driehaus Capital, also said goodbye to its stock, about $1.6 million worth. These moves are intriguing to say the least, as total hedge fund interest stayed the same (this is a bearish signal in our experience).

As you can see these stocks had an average of 23 hedge funds with bullish positions and the average amount invested in these stocks was $340 million. That figure was $319 million in RYN’s case. Brunswick Corporation (NYSE:BC) is the most popular stock in this table. On the other hand Penske Automotive Group, Inc. (NYSE:PAG) is the least popular one with only 17 bullish hedge fund positions. Compared to these stocks Rayonier Inc. (NYSE:RYN) is even less popular than PAG. Hedge funds dodged a bullet by taking a bearish stance towards RYN. Our calculations showed that the top 20 most popular hedge fund stocks returned 24.4% in 2019 through September 30th and outperformed the S&P 500 ETF (SPY) by 4 percentage points. Unfortunately RYN wasn’t nearly as popular as these 20 stocks (hedge fund sentiment was very bearish); RYN investors were disappointed as the stock returned -6% during the third quarter and underperformed the market. If you are interested in investing in large cap stocks with huge upside potential, you should check out the top 20 most popular stocks among hedge funds as many of these stocks already outperformed the market so far in 2019.