Here is What Hedge Funds Think About Radware Ltd. (RDWR)

Is Radware Ltd. (NASDAQ:RDWR) ready to rally soon? The smart money is getting more optimistic. The number of bullish hedge fund positions inched up by 2 lately. Our calculations also showed that RDWR isn’t among the 30 most popular stocks among hedge funds. RDWR was in 18 hedge funds’ portfolios at the end of the fourth quarter of 2018. There were 16 hedge funds in our database with RDWR holdings at the end of the previous quarter.

We’re going to take a gander at the fresh hedge fund action regarding Radware Ltd. (NASDAQ:RDWR). 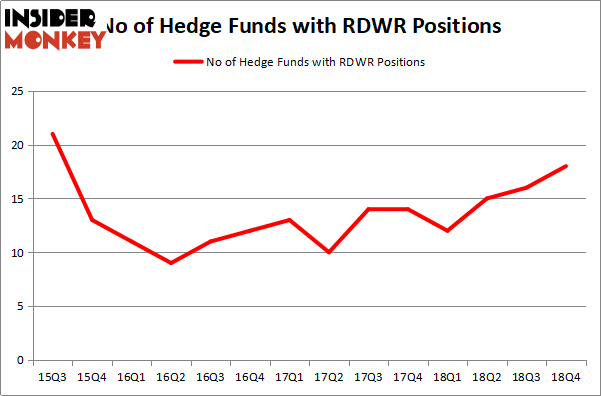 Among these funds, Rima Senvest Management held the most valuable stake in Radware Ltd. (NASDAQ:RDWR), which was worth $132.4 million at the end of the fourth quarter. On the second spot was Cadian Capital which amassed $82.9 million worth of shares. Moreover, Renaissance Technologies, Arrowstreet Capital, and Millennium Management were also bullish on Radware Ltd. (NASDAQ:RDWR), allocating a large percentage of their portfolios to this stock.

Consequently, key money managers were breaking ground themselves. Marshall Wace LLP, managed by Paul Marshall and Ian Wace, established the most outsized position in Radware Ltd. (NASDAQ:RDWR). Marshall Wace LLP had $3.2 million invested in the company at the end of the quarter. Peter Muller’s PDT Partners also made a $0.6 million investment in the stock during the quarter. The only other fund with a new position in the stock is Minhua Zhang’s Weld Capital Management.