QTS Realty Trust Inc (NYSE:QTS) has seen an increase in hedge fund sentiment of late. QTS was in 23 hedge funds’ portfolios at the end of June. There were 22 hedge funds in our database with QTS holdings at the end of the previous quarter. Our calculations also showed that QTS isn’t among the 30 most popular stocks among hedge funds (view the video below).

If you’d ask most shareholders, hedge funds are viewed as underperforming, old investment vehicles of yesteryear. While there are over 8000 funds trading at the moment, Our researchers choose to focus on the bigwigs of this club, about 750 funds. It is estimated that this group of investors preside over the lion’s share of the smart money’s total capital, and by tracking their highest performing investments, Insider Monkey has brought to light numerous investment strategies that have historically surpassed the broader indices. Insider Monkey’s flagship hedge fund strategy outstripped the S&P 500 index by around 5 percentage points per year since its inception in May 2014. We were able to generate large returns even by identifying short candidates. Our portfolio of short stocks lost 25.7% since February 2017 (through September 30th) even though the market was up more than 33% during the same period. We just shared a list of 10 short targets in our latest quarterly update . 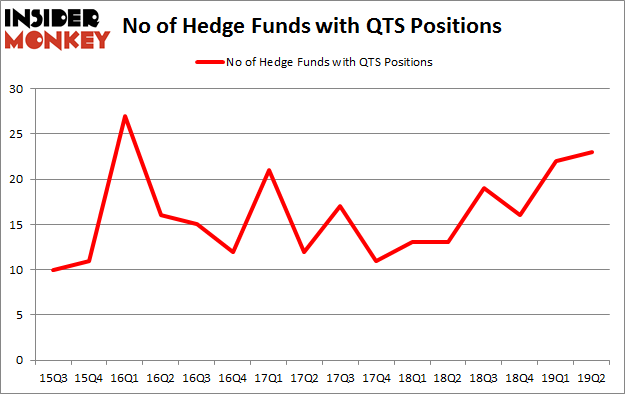 Among these funds, Zimmer Partners held the most valuable stake in QTS Realty Trust Inc (NYSE:QTS), which was worth $131.9 million at the end of the second quarter. On the second spot was Land & Buildings Investment Management which amassed $37.8 million worth of shares. Moreover, Balyasny Asset Management, Citadel Investment Group, and Hudson Bay Capital Management were also bullish on QTS Realty Trust Inc (NYSE:QTS), allocating a large percentage of their portfolios to this stock.

Let’s check out hedge fund activity in other stocks – not necessarily in the same industry as QTS Realty Trust Inc (NYSE:QTS) but similarly valued. We will take a look at The Geo Group, Inc. (NYSE:GEO), Agree Realty Corporation (NYSE:ADC), SeaWorld Entertainment Inc (NYSE:SEAS), and Triton International Limited (NYSE:TRTN). All of these stocks’ market caps are closest to QTS’s market cap.

As you can see these stocks had an average of 19.25 hedge funds with bullish positions and the average amount invested in these stocks was $362 million. That figure was $357 million in QTS’s case. SeaWorld Entertainment Inc (NYSE:SEAS) is the most popular stock in this table. On the other hand Agree Realty Corporation (NYSE:ADC) is the least popular one with only 11 bullish hedge fund positions. QTS Realty Trust Inc (NYSE:QTS) is not the most popular stock in this group but hedge fund interest is still above average. Our calculations showed that top 20 most popular stocks among hedge funds returned 24.4% in 2019 through September 30th and outperformed the S&P 500 ETF (SPY) by 4 percentage points. Hedge funds were also right about betting on QTS as the stock returned 12.3% during the third quarter and outperformed the market. Hedge funds were rewarded for their relative bullishness.