Here is What Hedge Funds Think About Qiagen NV (QGEN)

Is Qiagen NV (NASDAQ:QGEN) a bargain? Prominent investors are turning less bullish. The number of bullish hedge fund bets were trimmed by 3 lately. Our calculations also showed that QGEN isn’t among the 30 most popular stocks among hedge funds. QGEN was in 21 hedge funds’ portfolios at the end of December. There were 24 hedge funds in our database with QGEN positions at the end of the previous quarter.

In today’s marketplace there are several gauges market participants put to use to assess their stock investments. Two of the best gauges are hedge fund and insider trading activity. Our researchers have shown that, historically, those who follow the best picks of the best fund managers can outclass the broader indices by a solid amount (see the details here). 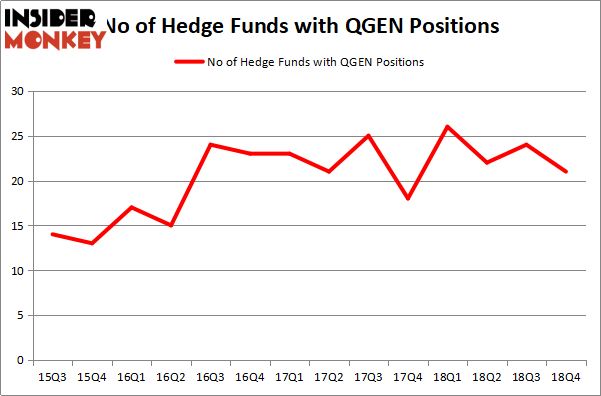 The largest stake in Qiagen NV (NASDAQ:QGEN) was held by AQR Capital Management, which reported holding $81.1 million worth of stock at the end of September. It was followed by D E Shaw with a $60.5 million position. Other investors bullish on the company included Healthcor Management LP, Sandler Capital Management, and Millennium Management.

Since Qiagen NV (NASDAQ:QGEN) has experienced declining sentiment from the smart money, it’s easy to see that there were a few money managers that elected to cut their entire stakes last quarter. It’s worth mentioning that Peter Rathjens, Bruce Clarke and John Campbell’s Arrowstreet Capital sold off the largest position of the “upper crust” of funds tracked by Insider Monkey, comprising an estimated $30.1 million in stock, and Glenn Russell Dubin’s Highbridge Capital Management was right behind this move, as the fund sold off about $13.1 million worth. These bearish behaviors are interesting, as total hedge fund interest fell by 3 funds last quarter.

As you can see these stocks had an average of 23.25 hedge funds with bullish positions and the average amount invested in these stocks was $522 million. That figure was $361 million in QGEN’s case. EXACT Sciences Corporation (NASDAQ:EXAS) is the most popular stock in this table. On the other hand National Retail Properties, Inc. (NYSE:NNN) is the least popular one with only 15 bullish hedge fund positions. Qiagen NV (NASDAQ:QGEN) is not the least popular stock in this group but hedge fund interest is still below average. Our calculations showed that the top 15 most popular stocks among hedge funds returned 21.3% through April 8th and outperformed the S&P 500 ETF (SPY) by more than 5 percentage points. Hedge funds were also right about betting on QGEN, though not to the same extent, as the stock returned 19.9% and outperformed the market as well.