Many investors, including Paul Tudor Jones or Stan Druckenmiller, have been saying before the Q4 market crash that the stock market is overvalued due to a low interest rate environment that leads to companies swapping their equity for debt and focusing mostly on short-term performance such as beating the quarterly earnings estimates. In the fourth quarter, many investors lost money due to unpredictable events such as the sudden increase in long-term interest rates and unintended consequences of the trade war with China. Nevertheless, many of the stocks that tanked in the fourth quarter still sport strong fundamentals and their decline was more related to the general market sentiment rather than their individual performance and hedge funds kept their bullish stance. In this article we will find out how hedge fund sentiment to Pitney Bowes Inc. (NYSE:PBI) changed recently.

Pitney Bowes Inc. (NYSE:PBI) shareholders have witnessed a decrease in support from the world’s most elite money managers in recent months. PBI was in 20 hedge funds’ portfolios at the end of the fourth quarter of 2018. There were 22 hedge funds in our database with PBI holdings at the end of the previous quarter. Our calculations also showed that pbi isn’t among the 30 most popular stocks among hedge funds.

Today there are tons of formulas stock market investors employ to analyze publicly traded companies. A pair of the less utilized formulas are hedge fund and insider trading indicators. We have shown that, historically, those who follow the best picks of the best investment managers can outpace the broader indices by a very impressive margin (see the details here).

What does the smart money think about Pitney Bowes Inc. (NYSE:PBI)?

At Q4’s end, a total of 20 of the hedge funds tracked by Insider Monkey were long this stock, a change of -9% from the second quarter of 2018. By comparison, 28 hedge funds held shares or bullish call options in PBI a year ago. With hedge funds’ sentiment swirling, there exists an “upper tier” of key hedge fund managers who were upping their stakes significantly (or already accumulated large positions). 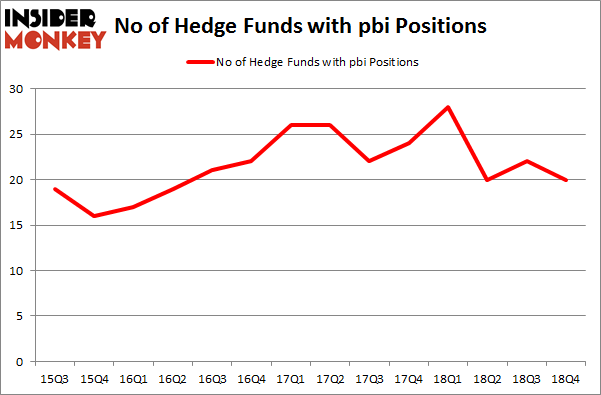 According to Insider Monkey’s hedge fund database, D. E. Shaw’s D E Shaw has the number one position in Pitney Bowes Inc. (NYSE:PBI), worth close to $23.4 million, accounting for less than 0.1%% of its total 13F portfolio. On D E Shaw’s heels is Cliff Asness of AQR Capital Management, with a $16.4 million position; less than 0.1%% of its 13F portfolio is allocated to the company. Some other peers with similar optimism comprise John Overdeck and David Siegel’s Two Sigma Advisors, Ken Griffin’s Citadel Investment Group and Chuck Royce’s Royce & Associates.

Since Pitney Bowes Inc. (NYSE:PBI) has witnessed declining sentiment from hedge fund managers, it’s safe to say that there is a sect of hedgies that elected to cut their positions entirely by the end of the third quarter. It’s worth mentioning that Israel Englander’s Millennium Management dropped the largest position of all the hedgies monitored by Insider Monkey, valued at an estimated $11.6 million in stock, and John Brennan’s Sirios Capital Management was right behind this move, as the fund cut about $4.5 million worth. These bearish behaviors are important to note, as total hedge fund interest dropped by 2 funds by the end of the third quarter.

As you can see these stocks had an average of 14.5 hedge funds with bullish positions and the average amount invested in these stocks was $100 million. That figure was $79 million in PBI’s case. Pacific Biosciences of California, Inc. (NASDAQ:PACB) is the most popular stock in this table. On the other hand National Research Corporation (NASDAQ:NRC) is the least popular one with only 5 bullish hedge fund positions. Pitney Bowes Inc. (NYSE:PBI) is not the most popular stock in this group but hedge fund interest is still above average. Our calculations showed that top 15 most popular stocks) among hedge funds returned 24.2% through April 22nd and outperformed the S&P 500 ETF (SPY) by more than 7 percentage points. Hedge funds were also right about betting on PBI, though not to the same extent, as the stock returned 17.8% and outperformed the market as well.