Petroleo Brasileiro S.A. – Petrobras (NYSE:PBR) has seen a decrease in hedge fund interest recently. PBR was in 30 hedge funds’ portfolios at the end of the first quarter of 2019. There were 32 hedge funds in our database with PBR positions at the end of the previous quarter. Our calculations also showed that pbr isn’t among the 30 most popular stocks among hedge funds.

At the end of the first quarter, a total of 30 of the hedge funds tracked by Insider Monkey were bullish on this stock, a change of -6% from the fourth quarter of 2018. On the other hand, there were a total of 27 hedge funds with a bullish position in PBR a year ago. With hedgies’ capital changing hands, there exists a select group of noteworthy hedge fund managers who were upping their holdings substantially (or already accumulated large positions). 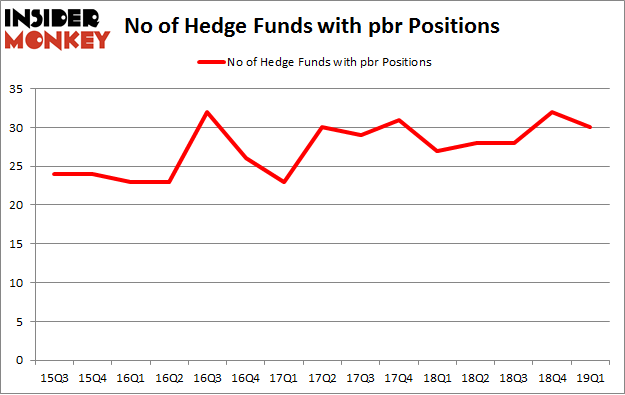 Among these funds, Renaissance Technologies held the most valuable stake in Petroleo Brasileiro S.A. – Petrobras (NYSE:PBR), which was worth $552.7 million at the end of the first quarter. On the second spot was Fisher Asset Management which amassed $546.3 million worth of shares. Moreover, Capital Growth Management, HBK Investments, and Contrarian Capital were also bullish on Petroleo Brasileiro S.A. – Petrobras (NYSE:PBR), allocating a large percentage of their portfolios to this stock.

Judging by the fact that Petroleo Brasileiro S.A. – Petrobras (NYSE:PBR) has experienced declining sentiment from hedge fund managers, we can see that there is a sect of hedgies that slashed their entire stakes in the third quarter. It’s worth mentioning that Rob Citrone’s Discovery Capital Management cut the largest position of all the hedgies tracked by Insider Monkey, comprising an estimated $64.2 million in stock. David Halpert’s fund, Prince Street Capital Management, also cut its stock, about $3.8 million worth. These moves are interesting, as total hedge fund interest fell by 2 funds in the third quarter.

Let’s now take a look at hedge fund activity in other stocks – not necessarily in the same industry as Petroleo Brasileiro S.A. – Petrobras (NYSE:PBR) but similarly valued. We will take a look at GlaxoSmithKline plc (NYSE:GSK), AstraZeneca plc (NYSE:AZN), Rio Tinto Group (NYSE:RIO), and The Toronto-Dominion Bank (NYSE:TD). All of these stocks’ market caps are similar to PBR’s market cap.

As you can see these stocks had an average of 24.25 hedge funds with bullish positions and the average amount invested in these stocks was $1555 million. That figure was $2313 million in PBR’s case. GlaxoSmithKline plc (NYSE:GSK) is the most popular stock in this table. On the other hand The Toronto-Dominion Bank (NYSE:TD) is the least popular one with only 18 bullish hedge fund positions. Compared to these stocks Petroleo Brasileiro S.A. – Petrobras (NYSE:PBR) is more popular among hedge funds. Our calculations showed that top 20 most popular stocks among hedge funds returned 1.9% in Q2 through May 30th and outperformed the S&P 500 ETF (SPY) by more than 3 percentage points. Unfortunately PBR wasn’t nearly as popular as these 20 stocks and hedge funds that were betting on PBR were disappointed as the stock returned -8.6% during the same period and underperformed the market. If you are interested in investing in large cap stocks with huge upside potential, you should check out the top 20 most popular stocks among hedge funds as 13 of these stocks already outperformed the market in Q2.