Here is What Hedge Funds Think About Personalis, Inc. (PSNL)

Before we spend days researching a stock idea we like to take a look at how hedge funds and billionaire investors recently traded that stock. Russell 2000 ETF (IWM) lagged the larger S&P 500 ETF (SPY) by more than 10 percentage points since the end of the third quarter of 2018. This means hedge funds that are allocating a higher percentage of their portfolio to small-cap stocks were probably underperforming the market. However, this also means that as small-cap stocks start to mean revert, these hedge funds will start delivering better returns than the S&P 500 Index funds. In this article, we will take a look at what hedge funds think about Personalis, Inc. (NASDAQ:PSNL).

Is Personalis, Inc. (NASDAQ:PSNL) a buy right now? Money managers are turning bullish. The number of bullish hedge fund bets moved up by 17 recently. Our calculations also showed that PSNL isn’t among the 30 most popular stocks among hedge funds (see the video below). PSNL was in 17 hedge funds’ portfolios at the end of June. There were 0 hedge funds in our database with PSNL holdings at the end of the previous quarter. 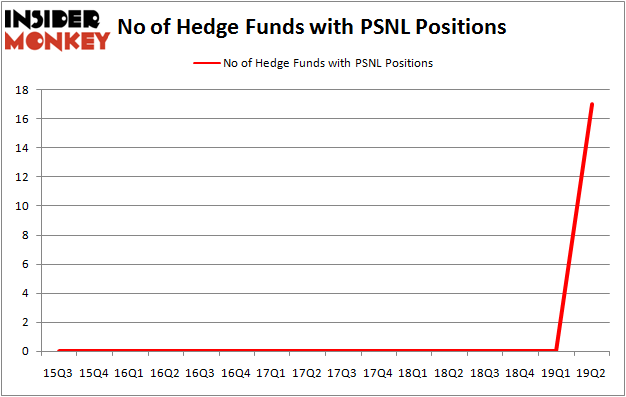 Unlike former hedge manager, Dr. Steve Sjuggerud, who is convinced Dow will soar past 40000, our long-short investment strategy doesn’t rely on bull markets to deliver double digit returns. We only rely on hedge fund buy/sell signals. We’re going to take a glance at the fresh hedge fund action regarding Personalis, Inc. (NASDAQ:PSNL).

According to Insider Monkey’s hedge fund database, Redmile Group, managed by Jeremy Green, holds the most valuable position in Personalis, Inc. (NASDAQ:PSNL). Redmile Group has a $10.9 million position in the stock, comprising 0.3% of its 13F portfolio. Coming in second is Israel Englander of Millennium Management, with a $9.7 million position; less than 0.1%% of its 13F portfolio is allocated to the company. Other members of the smart money that are bullish contain Benjamin A. Smith’s Laurion Capital Management, Richard Driehaus’s Driehaus Capital and Arthur B Cohen and Joseph Healey’s Healthcor Management LP.

As aggregate interest increased, key hedge funds were breaking ground themselves. Redmile Group, managed by Jeremy Green, established the most valuable position in Personalis, Inc. (NASDAQ:PSNL). Redmile Group had $10.9 million invested in the company at the end of the quarter. Israel Englander’s Millennium Management also initiated a $9.7 million position during the quarter. The following funds were also among the new PSNL investors: Benjamin A. Smith’s Laurion Capital Management, Richard Driehaus’s Driehaus Capital, and Arthur B Cohen and Joseph Healey’s Healthcor Management LP.

As you can see these stocks had an average of 10.75 hedge funds with bullish positions and the average amount invested in these stocks was $103 million. That figure was $84 million in PSNL’s case. Keane Group, Inc. (NYSE:FRAC) is the most popular stock in this table. On the other hand Urstadt Biddle Properties Inc. (NYSE:UBP) is the least popular one with only 2 bullish hedge fund positions. Personalis, Inc. (NASDAQ:PSNL) is not the most popular stock in this group but hedge fund interest is still above average. This is a slightly positive signal but we’d rather spend our time researching stocks that hedge funds are piling on. Our calculations showed that top 20 most popular stocks among hedge funds returned 24.4% in 2019 through September 30th and outperformed the S&P 500 ETF (SPY) by 4 percentage points. Unfortunately PSNL wasn’t nearly as popular as these 20 stocks and hedge funds that were betting on PSNL were disappointed as the stock returned -45.9% during the third quarter and underperformed the market. If you are interested in investing in large cap stocks with huge upside potential, you should check out the top 20 most popular stocks among hedge funds as many of these stocks already outperformed the market so far this year.

Here is What Hedge Funds Think About Hawkins, Inc. (HWKN)
Monthly Newsletter Strategy
Download a free copy of our newsletter and see the details inside!
Hedge Fund Resource Center
Related News
11 Largest Auto Insurance Companies In The US In 2019 10 Poorest Cities in America in 2019 8 Lowest Tar and Nicotine Cigarette Brands in 2019
Billionaire Hedge Funds