Here is What Hedge Funds Think About Pearson PLC (PSO)

It was a rough fourth quarter for many hedge funds, which were naturally unable to overcome the big dip in the broad market, as the S&P 500 fell by about 4.8% during 2018 and average hedge fund losing about 1%. The Russell 2000, composed of smaller companies, performed even worse, trailing the S&P by more than 6 percentage points, as investors fled less-known quantities for safe havens. This was the case with hedge funds, who we heard were pulling money from the market amid the volatility, which included money from small-cap stocks, which they invest in at a higher rate than other investors. This action contributed to the greater decline in these stocks during the tumultuous period. We will study how this market volatility affected their sentiment towards Pearson PLC (NYSE:PSO) during the quarter below.

Is Pearson PLC (NYSE:PSO) a bargain? Investors who are in the know are turning bullish. The number of bullish hedge fund positions went up by 2 recently. Our calculations also showed that PSO isn’t among the 30 most popular stocks among hedge funds. PSO was in 5 hedge funds’ portfolios at the end of the fourth quarter of 2018. There were 3 hedge funds in our database with PSO holdings at the end of the previous quarter.

To the average investor there are many signals investors employ to size up publicly traded companies. Some of the most innovative signals are hedge fund and insider trading moves. Our researchers have shown that, historically, those who follow the top picks of the top hedge fund managers can trounce the market by a significant amount (see the details here).

How have hedgies been trading Pearson PLC (NYSE:PSO)? 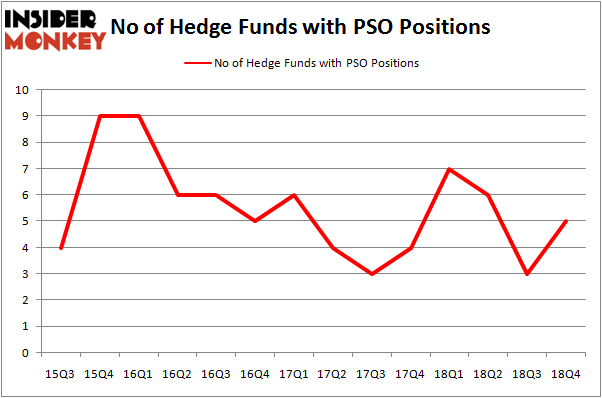 Of the funds tracked by Insider Monkey, Renaissance Technologies, managed by Jim Simons, holds the largest position in Pearson PLC (NYSE:PSO). Renaissance Technologies has a $7.6 million position in the stock, comprising less than 0.1%% of its 13F portfolio. On Renaissance Technologies’s heels is Arrowstreet Capital, managed by Peter Rathjens, Bruce Clarke and John Campbell, which holds a $7.5 million position; the fund has less than 0.1%% of its 13F portfolio invested in the stock. Remaining hedge funds and institutional investors that hold long positions consist of D. E. Shaw’s D E Shaw, John Overdeck and David Siegel’s Two Sigma Advisors and Israel Englander’s Millennium Management.

Now, key hedge funds have been driving this bullishness. D E Shaw, managed by D. E. Shaw, created the most outsized position in Pearson PLC (NYSE:PSO). D E Shaw had $0.5 million invested in the company at the end of the quarter. Israel Englander’s Millennium Management also initiated a $0.2 million position during the quarter.

As you can see these stocks had an average of 25.5 hedge funds with bullish positions and the average amount invested in these stocks was $453 million. That figure was $16 million in PSO’s case. Norwegian Cruise Line Holdings Ltd (NASDAQ:NCLH) is the most popular stock in this table. On the other hand Iron Mountain Incorporated (NYSE:IRM) is the least popular one with only 11 bullish hedge fund positions. Compared to these stocks Pearson PLC (NYSE:PSO) is even less popular than IRM. Considering that hedge funds aren’t fond of this stock in relation to other companies analyzed in this article, it may be a good idea to analyze it in detail and understand why the smart money isn’t behind this stock. This isn’t necessarily bad news. Although it is possible that hedge funds may think the stock is overpriced and view the stock as a short candidate, they may not be very familiar with the bullish thesis. Our calculations showed that top 15 most popular stocks among hedge funds returned 19.7% through March 15th and outperformed the S&P 500 ETF (SPY) by 6.6 percentage points. Unfortunately PSO wasn’t in this group. Hedge funds that bet on PSO were disappointed as the stock lost 7.7% and underperformed the market. If you are interested in investing in large cap stocks, you should check out the top 15 hedge fund stocks as 13 of these outperformed the market.