We are still in an overall bull market and many stocks that smart money investors were piling into surged through October 17th. Among them, Facebook and Microsoft ranked among the top 3 picks and these stocks gained 45% and 39% respectively. Hedge funds’ top 3 stock picks returned 34.4% this year and beat the S&P 500 ETFs by 13 percentage points. Investing in index funds guarantees you average returns, not superior returns. We are looking to generate superior returns for our readers. That’s why we believe it isn’t a waste of time to check out hedge fund sentiment before you invest in a stock like Par Pacific Holdings, Inc. (NYSE:PARR).

Is Par Pacific Holdings, Inc. (NYSE:PARR) a buy here? Prominent investors are taking a bearish view. The number of bullish hedge fund positions retreated by 2 recently. Our calculations also showed that PARR isn’t among the 30 most popular stocks among hedge funds (see the video below). PARR was in 14 hedge funds’ portfolios at the end of June. There were 16 hedge funds in our database with PARR positions at the end of the previous quarter.

To most stock holders, hedge funds are seen as slow, outdated investment vehicles of yesteryear. While there are more than 8000 funds with their doors open today, Our researchers choose to focus on the masters of this club, around 750 funds. These money managers administer most of the hedge fund industry’s total asset base, and by keeping track of their inimitable equity investments, Insider Monkey has found various investment strategies that have historically outperformed the S&P 500 index. Insider Monkey’s flagship hedge fund strategy outpaced the S&P 500 index by around 5 percentage points annually since its inception in May 2014. We were able to generate large returns even by identifying short candidates. Our portfolio of short stocks lost 25.7% since February 2017 (through September 30th) even though the market was up more than 33% during the same period. We just shared a list of 10 short targets in our latest quarterly update . 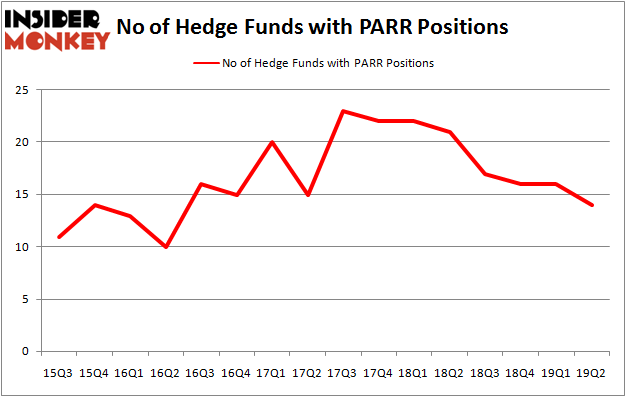 More specifically, Park West Asset Management was the largest shareholder of Par Pacific Holdings, Inc. (NYSE:PARR), with a stake worth $32.3 million reported as of the end of March. Trailing Park West Asset Management was Whitebox Advisors, which amassed a stake valued at $30.8 million. Renaissance Technologies, Birch Run Capital, and Omega Advisors were also very fond of the stock, giving the stock large weights in their portfolios.

Due to the fact that Par Pacific Holdings, Inc. (NYSE:PARR) has experienced declining sentiment from the aggregate hedge fund industry, logic holds that there were a few funds that slashed their positions entirely in the second quarter. Intriguingly, Paul Marshall and Ian Wace’s Marshall Wace LLP sold off the largest position of the “upper crust” of funds tracked by Insider Monkey, worth an estimated $0.7 million in stock. Peter Rathjens, Bruce Clarke and John Campbell’s fund, Arrowstreet Capital, also dropped its stock, about $0.6 million worth. These transactions are intriguing to say the least, as total hedge fund interest dropped by 2 funds in the second quarter.

As you can see these stocks had an average of 18 hedge funds with bullish positions and the average amount invested in these stocks was $101 million. That figure was $122 million in PARR’s case. Abercrombie & Fitch Co. (NYSE:ANF) is the most popular stock in this table. On the other hand 3D Systems Corporation (NYSE:DDD) is the least popular one with only 11 bullish hedge fund positions. Par Pacific Holdings, Inc. (NYSE:PARR) is not the least popular stock in this group but hedge fund interest is still below average. Our calculations showed that top 20 most popular stocks among hedge funds returned 24.4% in 2019 through September 30th and outperformed the S&P 500 ETF (SPY) by 4 percentage points. A small number of hedge funds were also right about betting on PARR as the stock returned 11.4% during the same time frame and outperformed the market by an even larger margin.