Nielsen Holdings plc (NYSE:NLSN) was in 33 hedge funds’ portfolios at the end of March. NLSN has experienced a decrease in hedge fund interest of late. There were 35 hedge funds in our database with NLSN positions at the end of the previous quarter. Our calculations also showed that nlsn isn’t among the 30 most popular stocks among hedge funds. 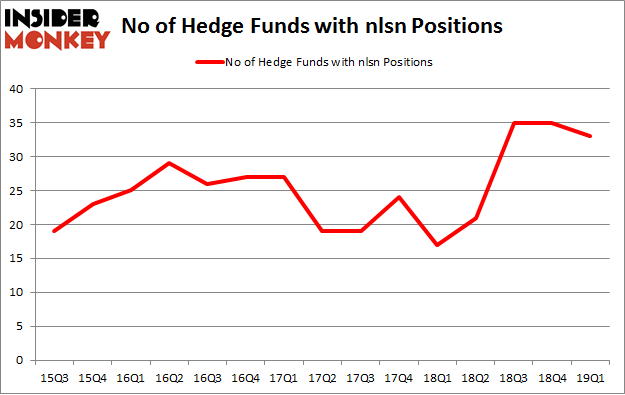 More specifically, Windacre Partnership was the largest shareholder of Nielsen Holdings plc (NYSE:NLSN), with a stake worth $409.9 million reported as of the end of March. Trailing Windacre Partnership was Elliott Management, which amassed a stake valued at $331.4 million. Ariel Investments, Deccan Value Advisors, and Omega Advisors were also very fond of the stock, giving the stock large weights in their portfolios.

Due to the fact that Nielsen Holdings plc (NYSE:NLSN) has faced a decline in interest from the aggregate hedge fund industry, it’s easy to see that there was a specific group of hedgies that elected to cut their positions entirely heading into Q3. Intriguingly, Glenn Greenberg’s Brave Warrior Capital dumped the largest investment of all the hedgies watched by Insider Monkey, valued at about $60.2 million in stock. John Paulson’s fund, Paulson & Co, also sold off its stock, about $31.8 million worth. These bearish behaviors are intriguing to say the least, as aggregate hedge fund interest was cut by 2 funds heading into Q3.