We can judge whether Mitsubishi UFJ Financial Group Inc (NYSE:MUFG) is a good investment right now by following the lead of some of the best investors in the world and piggybacking their ideas. There’s no better way to get these firms’ immense resources and analytical capabilities working for us than to follow their lead into their best ideas. While not all of these picks will be winners, our research shows that these picks historically outperformed the market when we factor in known risk factors.

Mitsubishi UFJ Financial Group Inc (NYSE:MUFG) shareholders have witnessed an increase in activity from the world’s largest hedge funds of late. MUFG was in 9 hedge funds’ portfolios at the end of December. Our calculations also showed that MUFG isn’t among the 30 most popular stocks among hedge funds.

To most shareholders, hedge funds are viewed as unimportant, outdated financial vehicles of yesteryear. While there are over 8000 funds trading at present, Our experts choose to focus on the crème de la crème of this group, approximately 750 funds. It is estimated that this group of investors administer bulk of the hedge fund industry’s total capital, and by following their matchless investments, Insider Monkey has uncovered many investment strategies that have historically surpassed the market. Insider Monkey’s flagship hedge fund strategy defeated the S&P 500 index by nearly 5 percentage points per annum since its inception in May 2014 through early November 2018. We were able to generate large returns even by identifying short candidates. Our portfolio of short stocks lost 27.5% since February 2017 (through March 12th) even though the market was up nearly 25% during the same period. We just shared a list of 6 short targets in our latest quarterly update and they are already down an average of 6% in less than a month.

What does the smart money think about Mitsubishi UFJ Financial Group Inc (NYSE:MUFG)?

The largest stake in Mitsubishi UFJ Financial Group Inc (NYSE:MUFG) was held by LMR Partners, which reported holding $50.9 million worth of stock at the end of September. It was followed by Fisher Asset Management with a $11.6 million position. Other investors bullish on the company included D E Shaw, Arrowstreet Capital, and Two Sigma Advisors. 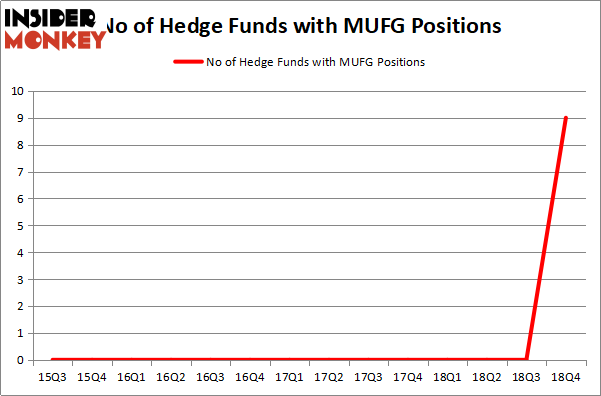 As industrywide interest jumped, specific money managers have been driving this bullishness. Two Sigma Advisors, managed by John Overdeck and David Siegel, established the most valuable position in Mitsubishi UFJ Financial Group Inc (NYSE:MUFG). Two Sigma Advisors had $0.5 million invested in the company at the end of the quarter. Paul Marshall and Ian Wace’s Marshall Wace LLP also made a $0.5 million investment in the stock during the quarter. The only other fund with a new position in the stock is Jim Simons’s Renaissance Technologies.

Let’s go over hedge fund activity in other stocks – not necessarily in the same industry as Mitsubishi UFJ Financial Group Inc (NYSE:MUFG) but similarly valued. We will take a look at Enbridge Inc (NYSE:ENB), BlackRock, Inc. (NYSE:BLK), Goldman Sachs Group, Inc. (NYSE:GS), and Ambev SA (NYSE:ABEV). All of these stocks’ market caps are similar to MUFG’s market cap.

As you can see these stocks had an average of 34.25 hedge funds with bullish positions and the average amount invested in these stocks was $1955 million. That figure was $73 million in MUFG’s case. Goldman Sachs Group, Inc. (NYSE:GS) is the most popular stock in this table. On the other hand Ambev SA (NYSE:ABEV) is the least popular one with only 13 bullish hedge fund positions. Compared to these stocks Mitsubishi UFJ Financial Group Inc (NYSE:MUFG) is even less popular than ABEV. Our calculations showed that top 15 most popular stocks among hedge funds returned 19.7% through March 15th and outperformed the S&P 500 ETF (SPY) by 6.6 percentage points. Unfortunately MUFG wasn’t in this group. Hedge funds that bet on MUFG were disappointed as the stock returned 6.2% and underperformed the market. If you are interested in investing in large cap stocks, you should check out the top 15 hedge fund stocks as 13 of these outperformed the market.

Were Hedge Funds Right About Dumping Twenty-First Century Fox Inc (FOX)?
Monthly Newsletter Strategy
Download a free copy of our newsletter and see the details inside!
Hedge Fund Resource Center
Related News
Ten of the Most Common Addictions 13 African Countries with the Largest White Population in 2018 6 Causes of Human Trafficking in Africa, India, and US
Billionaire Hedge Funds