Concerns over rising interest rates and expected further rate increases have hit several stocks hard during the fourth quarter. NASDAQ and Russell 2000 indices were already in correction territory. More importantly, Russell 2000 ETF (IWM) underperformed the larger S&P 500 ETF (SPY) by nearly 7 percentage points in the fourth quarter. Hedge funds and institutional investors tracked by Insider Monkey usually invest a disproportionate amount of their portfolios in smaller cap stocks. We have been receiving indications that hedge funds were paring back their overall exposure and this is one of the factors behind the recent movements in major indices. In this article, we will take a closer look at hedge fund sentiment towards Merit Medical Systems, Inc. (NASDAQ:MMSI).

Is Merit Medical Systems, Inc. (NASDAQ:MMSI) going to take off soon? Money managers are becoming more confident. The number of long hedge fund bets improved by 6 recently. Our calculations also showed that mmsi isn’t among the 30 most popular stocks among hedge funds.

What have hedge funds been doing with Merit Medical Systems, Inc. (NASDAQ:MMSI)?

At the end of the fourth quarter, a total of 18 of the hedge funds tracked by Insider Monkey held long positions in this stock, a change of 50% from the second quarter of 2018. Below, you can check out the change in hedge fund sentiment towards MMSI over the last 14 quarters. So, let’s review which hedge funds were among the top holders of the stock and which hedge funds were making big moves. 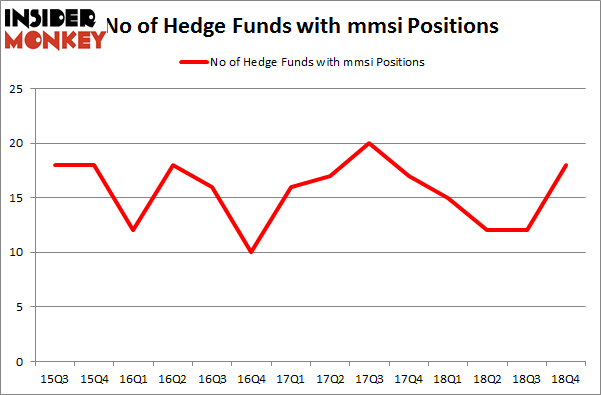 More specifically, Perceptive Advisors was the largest shareholder of Merit Medical Systems, Inc. (NASDAQ:MMSI), with a stake worth $52.2 million reported as of the end of September. Trailing Perceptive Advisors was Point72 Asset Management, which amassed a stake valued at $45.7 million. Partner Fund Management, Royce & Associates, and Fisher Asset Management were also very fond of the stock, giving the stock large weights in their portfolios.

As one would reasonably expect, some big names were breaking ground themselves. Marshall Wace LLP, managed by Paul Marshall and Ian Wace, established the most valuable position in Merit Medical Systems, Inc. (NASDAQ:MMSI). Marshall Wace LLP had $12.2 million invested in the company at the end of the quarter. Israel Englander’s Millennium Management also made a $6.7 million investment in the stock during the quarter. The following funds were also among the new MMSI investors: David Lohman’s Diag Capital, David Harding’s Winton Capital Management, and Brandon Haley’s Holocene Advisors.

As you can see these stocks had an average of 16.75 hedge funds with bullish positions and the average amount invested in these stocks was $114 million. That figure was $207 million in MMSI’s case. Tech Data Corp (NASDAQ:TECD) is the most popular stock in this table. On the other hand Proto Labs Inc (NYSE:PRLB) is the least popular one with only 10 bullish hedge fund positions. Merit Medical Systems, Inc. (NASDAQ:MMSI) is not the most popular stock in this group but hedge fund interest is still above average. This is a slightly positive signal but we’d rather spend our time researching stocks that hedge funds are piling on. Our calculations showed that top 15 most popular stocks) among hedge funds returned 24.2% through April 22nd and outperformed the S&P 500 ETF (SPY) by more than 7 percentage points. Unfortunately MMSI wasn’t nearly as popular as these 15 stock and hedge funds that were betting on MMSI were disappointed as the stock returned 3.2% and underperformed the market. If you are interested in investing in large cap stocks with huge upside potential, you should check out the top 15 most popular stocks) among hedge funds as 13 of these stocks already outperformed the market this year.