The latest 13F reporting period has come and gone, and Insider Monkey is again at the forefront when it comes to making use of this gold mine of data. We have processed the filings of the more than 700 world-class investment firms that we track and now have access to the collective wisdom contained in these filings, which are based on their September 30 holdings, data that is available nowhere else. Should you consider Mastercard Inc (NYSE:MA) for your portfolio? We’ll look to this invaluable collective wisdom for the answer.

In the eyes of most traders, hedge funds are viewed as unimportant, old investment tools of years past. While there are more than 8000 funds trading at present, We choose to focus on the moguls of this group, around 700 funds. Most estimates calculate that this group of people administer the majority of the smart money’s total capital, and by paying attention to their first-class picks, Insider Monkey has discovered a few investment strategies that have historically outrun the market. Insider Monkey’s flagship hedge fund strategy beat the S&P 500 index by 6 percentage points annually since its inception in May 2014 through early November 2018. We were able to generate large returns even by identifying short candidates. Our portfolio of short stocks lost 26.1% since February 2017 even though the market was up nearly 19% during the same period. We just shared a list of 11 short targets in our latest quarterly update.

How have hedgies been trading Mastercard Inc (NYSE:MA)?

At Q3’s end, a total of 95 of the hedge funds tracked by Insider Monkey were bullish on this stock, a change of 8% from the second quarter of 2018. On the other hand, there were a total of 82 hedge funds with a bullish position in MA at the beginning of this year. With hedge funds’ sentiment swirling, there exists an “upper tier” of key hedge fund managers who were adding to their stakes significantly (or already accumulated large positions). 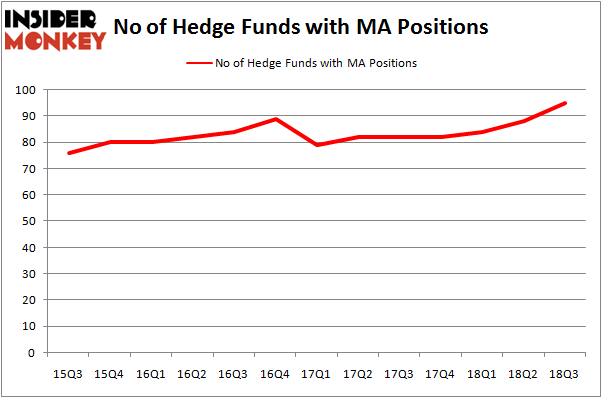 More specifically, Gardner Russo & Gardner was the largest shareholder of Mastercard Inc (NYSE:MA), with a stake worth $1859.1 million reported as of the end of September. Trailing Gardner Russo & Gardner was Akre Capital Management, which amassed a stake valued at $1185.9 million. Berkshire Hathaway, Arrowstreet Capital, and OZ Management were also very fond of the stock, giving the stock large weights in their portfolios.

As you can see these stocks had an average of 56.25 hedge funds with bullish positions and the average amount invested in these stocks was $4159 million. That figure was $10069 million in MA’s case. AT&T Inc. (NYSE:T) is the most popular stock in this table. On the other hand Taiwan Semiconductor Mfg. Co. Ltd. (NYSE:TSM) is the least popular one with only 42 bullish hedge fund positions. Compared to these stocks Mastercard Inc (NYSE:MA) is more popular among hedge funds. Considering that hedge funds are fond of this stock in relation to its market cap peers, it may be a good idea to analyze it in detail and potentially include it in your portfolio.