Is Marsh & McLennan Companies, Inc. (NYSE:MMC) a good bet right now? We like to analyze hedge fund sentiment before doing days of in-depth research. We do so because hedge funds and other elite investors have numerous Ivy League graduates, expert network advisers, and supply chain tipsters working or consulting for them. There is not a shortage of news stories covering failed hedge fund investments and it is a fact that hedge funds’ picks don’t beat the market 100% of the time, but their consensus picks have historically done very well and have outperformed the market after adjusting for risk.

Marsh & McLennan Companies, Inc. (NYSE:MMC) shares haven’t seen a lot of action during the third quarter. Overall, hedge fund sentiment was unchanged. The stock was in 29 hedge funds’ portfolios at the end of December. The level and the change in hedge fund popularity aren’t the only variables you need to analyze to decipher hedge funds’ perspectives. A stock may witness a boost in popularity but it may still be less popular than similarly priced stocks. That’s why at the end of this article we will examine companies such as Phillips 66 (NYSE:PSX), Kimberly Clark Corporation (NYSE:KMB), and Humana Inc (NYSE:HUM) to gather more data points.

To most traders, hedge funds are seen as underperforming, outdated investment tools of the past. While there are over 8000 funds with their doors open at present, We hone in on the crème de la crème of this club, approximately 750 funds. Most estimates calculate that this group of people watch over most of all hedge funds’ total capital, and by monitoring their finest stock picks, Insider Monkey has brought to light many investment strategies that have historically exceeded the market. Insider Monkey’s flagship hedge fund strategy outpaced the S&P 500 index by nearly 5 percentage points annually since its inception in May 2014 through early November 2018. We were able to generate large returns even by identifying short candidates. Our portfolio of short stocks lost 27.5% since February 2017 (through March 12th) even though the market was up nearly 25% during the same period. We just shared a list of 6 short targets in our latest quarterly update and they are already down an average of 6% in less than a month. 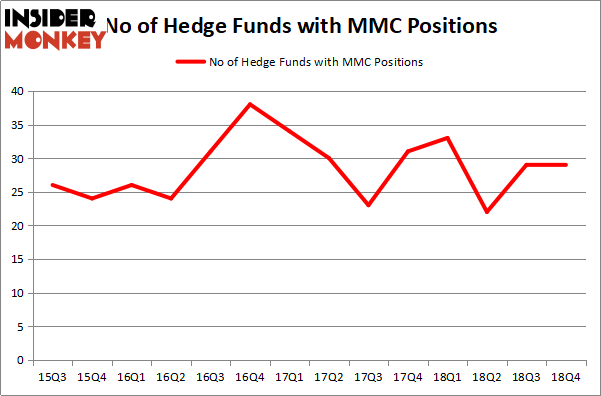 More specifically, Diamond Hill Capital was the largest shareholder of Marsh & McLennan Companies, Inc. (NYSE:MMC), with a stake worth $144.5 million reported as of the end of September. Trailing Diamond Hill Capital was Polar Capital, which amassed a stake valued at $127.5 million. Citadel Investment Group, Adage Capital Management, and Markel Gayner Asset Management were also very fond of the stock, giving the stock large weights in their portfolios.

Judging by the fact that Marsh & McLennan Companies, Inc. (NYSE:MMC) has witnessed a decline in interest from the aggregate hedge fund industry, it’s easy to see that there was a specific group of funds who were dropping their positions entirely by the end of the third quarter. Interestingly, Charles de Vaulx’s International Value Advisers sold off the largest stake of the “upper crust” of funds tracked by Insider Monkey, worth an estimated $47.5 million in stock. Greg Poole’s fund, Echo Street Capital Management, also said goodbye to its stock, about $20.4 million worth. These transactions are interesting, as aggregate hedge fund interest stayed the same (this is a bearish signal in our experience).

As you can see these stocks had an average of 38.75 hedge funds with bullish positions and the average amount invested in these stocks was $1683 million. That figure was $659 million in MMC’s case. Phillips 66 (NYSE:PSX) is the most popular stock in this table. On the other hand Brookfield Asset Management Inc. (NYSE:BAM) is the least popular one with only 25 bullish hedge fund positions. Marsh & McLennan Companies, Inc. (NYSE:MMC) is not the least popular stock in this group but hedge fund interest is still below average. Our calculations showed that top 15 most popular stocks among hedge funds returned 19.7% through March 15th and outperformed the S&P 500 ETF (SPY) by 6.6 percentage points. Hedge funds were also right about betting on MMC, though not to the same extent, as the stock returned 17.6% and outperformed the market as well.