Marriott International Inc (NASDAQ:MAR) was in 32 hedge funds’ portfolios at the end of the fourth quarter of 2018. MAR has experienced an increase in activity from the world’s largest hedge funds recently. There were 29 hedge funds in our database with MAR holdings at the end of the previous quarter. Our calculations also showed that MAR isn’t among the 30 most popular stocks among hedge funds.

To most stock holders, hedge funds are perceived as slow, old investment vehicles of years past. While there are more than 8000 funds with their doors open at present, Our researchers hone in on the leaders of this group, about 750 funds. These investment experts command the majority of all hedge funds’ total asset base, and by keeping track of their top stock picks, Insider Monkey has uncovered various investment strategies that have historically outpaced the broader indices. Insider Monkey’s flagship hedge fund strategy outstripped the S&P 500 index by nearly 5 percentage points per annum since its inception in May 2014 through early November 2018. We were able to generate large returns even by identifying short candidates. Our portfolio of short stocks lost 27.5% since February 2017 (through March 12th) even though the market was up nearly 25% during the same period. We just shared a list of 6 short targets in our latest quarterly update and they are already down an average of 6% in less than a month.

How have hedgies been trading Marriott International Inc (NASDAQ:MAR)?

At Q4’s end, a total of 32 of the hedge funds tracked by Insider Monkey were long this stock, a change of 10% from the second quarter of 2018. By comparison, 38 hedge funds held shares or bullish call options in MAR a year ago. With the smart money’s positions undergoing their usual ebb and flow, there exists a few key hedge fund managers who were upping their stakes considerably (or already accumulated large positions). 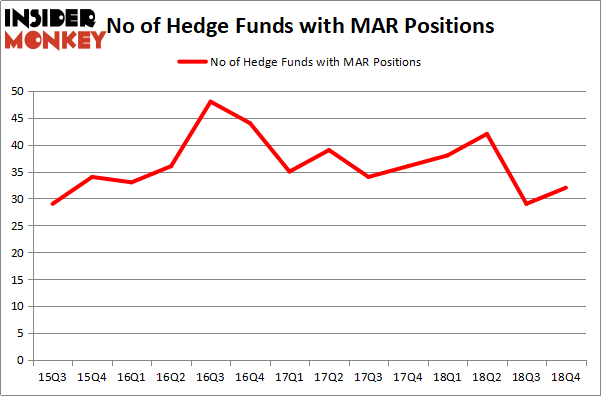 Among these funds, Eagle Capital Management held the most valuable stake in Marriott International Inc (NASDAQ:MAR), which was worth $1051.5 million at the end of the third quarter. On the second spot was Soroban Capital Partners which amassed $182 million worth of shares. Moreover, Markel Gayner Asset Management, Highfields Capital Management, and Long Pond Capital were also bullish on Marriott International Inc (NASDAQ:MAR), allocating a large percentage of their portfolios to this stock.

With a general bullishness amongst the heavyweights, key money managers have been driving this bullishness. Soroban Capital Partners, managed by Eric W. Mandelblatt and Gaurav Kapadia, initiated the most outsized position in Marriott International Inc (NASDAQ:MAR). Soroban Capital Partners had $182 million invested in the company at the end of the quarter. John Khoury’s Long Pond Capital also initiated a $68.3 million position during the quarter. The following funds were also among the new MAR investors: Stuart J. Zimmer’s Zimmer Partners, Benjamin A. Smith’s Laurion Capital Management, and Sander Gerber’s Hudson Bay Capital Management.

As you can see these stocks had an average of 38.75 hedge funds with bullish positions and the average amount invested in these stocks was $1395 million. That figure was $1802 million in MAR’s case. The Sherwin-Williams Company (NYSE:SHW) is the most popular stock in this table. On the other hand Prologis Inc (NYSE:PLD) is the least popular one with only 30 bullish hedge fund positions. Marriott International Inc (NASDAQ:MAR) is not the least popular stock in this group but hedge fund interest is still below average. This is a slightly negative signal and we’d rather spend our time researching stocks that hedge funds are piling on. Our calculations showed that top 15 most popular stocks among hedge funds returned 19.7% through March 15th and outperformed the S&P 500 ETF (SPY) by 6.6 percentage points. Unfortunately MAR wasn’t in this group. Hedge funds that bet on MAR were disappointed as the stock returned 13% and underperformed the market. If you are interested in investing in large cap stocks, you should check out the top 15 hedge fund stocks as 13 of these outperformed the market.

Were Hedge Funds Right About Dumping FedEx Corporation (FDX)?
Monthly Newsletter Strategy
Download a free copy of our newsletter and see the details inside!
Hedge Fund Resource Center
Related News
10 Stocks Hedge Funds Ditched in Q3 Just Before the Market Crushed Them Hedge Funds Are Dumping Marriott International Inc (MAR) Impala Asset Management’s Performance, AUM, and Holdings Will Cruise Stocks Sink Your Portfolio in 2018? 10 Best Hostels in the World 10 Most Profitable Hotels in The World 10 Luxury Hotel Brands In The World Ten of the Most Common Addictions 13 African Countries with the Largest White Population in 2018 6 Causes of Human Trafficking in Africa, India, and US
Billionaire Hedge Funds