Here is What Hedge Funds Think About MakeMyTrip Limited (MMYT)

A market surge in the first quarter, spurred by easing global macroeconomic concerns and Powell’s pivot ended up having a positive impact on the markets and many hedge funds as a result. The stocks of smaller companies which were especially hard hit during the fourth quarter slightly outperformed the market during the first quarter. Unfortunately, Trump is unpredictable and volatility returned in the second quarter and smaller-cap stocks went back to selling off. We finished compiling the latest 13F filings to get an idea about what hedge funds are thinking about the overall market as well as individual stocks. In this article we will study the hedge fund sentiment to see how those concerns affected their ownership of MakeMyTrip Limited (NASDAQ:MMYT) during the quarter.

MakeMyTrip Limited (NASDAQ:MMYT) has experienced an increase in support from the world’s most elite money managers recently. MMYT was in 12 hedge funds’ portfolios at the end of the first quarter of 2019. There were 11 hedge funds in our database with MMYT positions at the end of the previous quarter. Our calculations also showed that MMYT isn’t among the 30 most popular stocks among hedge funds.

According to most shareholders, hedge funds are assumed to be underperforming, old investment tools of the past. While there are greater than 8000 funds trading at the moment, We choose to focus on the masters of this group, approximately 750 funds. These hedge fund managers control the majority of all hedge funds’ total capital, and by following their highest performing investments, Insider Monkey has revealed a number of investment strategies that have historically defeated the broader indices. Insider Monkey’s flagship hedge fund strategy beat the S&P 500 index by around 5 percentage points per annum since its inception in May 2014 through June 18th. We were able to generate large returns even by identifying short candidates. Our portfolio of short stocks lost 28.2% since February 2017 (through June 18th) even though the market was up nearly 30% during the same period. We just shared a list of 5 short targets in our latest quarterly update and they are already down an average of 8.2% in a month whereas our long picks outperformed the market by 2.5 percentage points in this volatile 5 week period (our long picks also beat the market by 15 percentage points so far this year).

What have hedge funds been doing with MakeMyTrip Limited (NASDAQ:MMYT)?

At the end of the first quarter, a total of 12 of the hedge funds tracked by Insider Monkey held long positions in this stock, a change of 9% from the previous quarter. The graph below displays the number of hedge funds with bullish position in MMYT over the last 15 quarters. With the smart money’s capital changing hands, there exists an “upper tier” of noteworthy hedge fund managers who were adding to their stakes considerably (or already accumulated large positions). 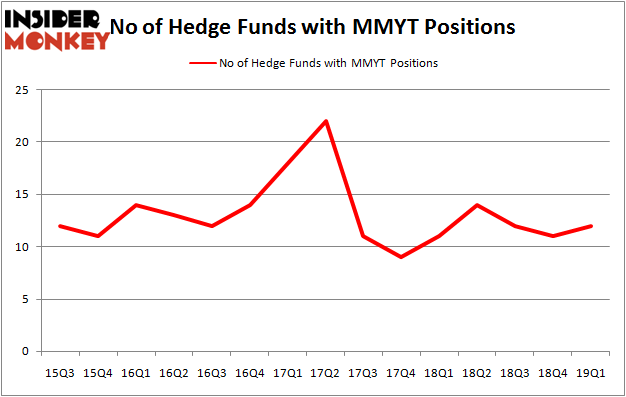 More specifically, GMT Capital was the largest shareholder of MakeMyTrip Limited (NASDAQ:MMYT), with a stake worth $25 million reported as of the end of March. Trailing GMT Capital was QVT Financial, which amassed a stake valued at $16.5 million. Driehaus Capital, Balyasny Asset Management, and Symmetry Peak Management were also very fond of the stock, giving the stock large weights in their portfolios.

As one would reasonably expect, key hedge funds were leading the bulls’ herd. Driehaus Capital, managed by Richard Driehaus, initiated the largest position in MakeMyTrip Limited (NASDAQ:MMYT). Driehaus Capital had $14.5 million invested in the company at the end of the quarter. Dmitry Balyasny’s Balyasny Asset Management also initiated a $4.1 million position during the quarter. The other funds with new positions in the stock are Frank Slattery’s Symmetry Peak Management, Frank Slattery’s Symmetry Peak Management, and Gavin Saitowitz and Cisco J. del Valle’s Springbok Capital.

As you can see these stocks had an average of 17.5 hedge funds with bullish positions and the average amount invested in these stocks was $279 million. That figure was $70 million in MMYT’s case. Range Resources Corp. (NYSE:RRC) is the most popular stock in this table. On the other hand BancorpSouth Bank (NYSE:BXS) is the least popular one with only 9 bullish hedge fund positions. MakeMyTrip Limited (NASDAQ:MMYT) is not the least popular stock in this group but hedge fund interest is still below average. This is a slightly negative signal and we’d rather spend our time researching stocks that hedge funds are piling on. Our calculations showed that top 20 most popular stocks among hedge funds returned 6.2% in Q2 through June 19th and outperformed the S&P 500 ETF (SPY) by nearly 3 percentage points. Unfortunately MMYT wasn’t nearly as popular as these 20 stocks (hedge fund sentiment was quite bearish); MMYT investors were disappointed as the stock returned -6.1% during the same time period and underperformed the market. If you are interested in investing in large cap stocks with huge upside potential, you should check out the top 20 most popular stocks among hedge funds as 13 of these stocks already outperformed the market so far in Q2.