Is MakeMyTrip Limited (NASDAQ:MMYT) worth your attention right now? Investors who are in the know are in a bearish mood. The number of long hedge fund positions dropped by 2 recently. Our calculations also showed that mmyt isn’t among the 30 most popular stocks among hedge funds. MMYT was in 12 hedge funds’ portfolios at the end of the third quarter of 2018. There were 14 hedge funds in our database with MMYT holdings at the end of the previous quarter.

In the financial world there are several indicators investors use to evaluate publicly traded companies. Some of the most useful indicators are hedge fund and insider trading interest. Our experts have shown that, historically, those who follow the top picks of the top money managers can outpace the broader indices by a very impressive margin (see the details here).

What does the smart money think about MakeMyTrip Limited (NASDAQ:MMYT)?

At the end of the third quarter, a total of 12 of the hedge funds tracked by Insider Monkey were long this stock, a change of -14% from the previous quarter. By comparison, 9 hedge funds held shares or bullish call options in MMYT heading into this year. With the smart money’s capital changing hands, there exists an “upper tier” of noteworthy hedge fund managers who were increasing their holdings significantly (or already accumulated large positions). 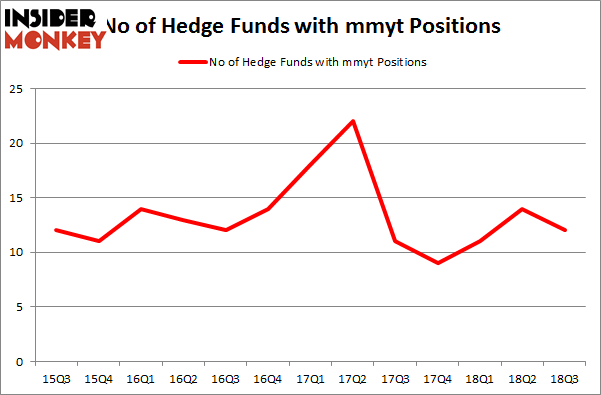 More specifically, GMT Capital was the largest shareholder of MakeMyTrip Limited (NASDAQ:MMYT), with a stake worth $20.8 million reported as of the end of September. Trailing GMT Capital was QVT Financial, which amassed a stake valued at $16.4 million. Falcon Edge Capital, PAR Capital Management, and Millennium Management were also very fond of the stock, giving the stock large weights in their portfolios.

Seeing as MakeMyTrip Limited (NASDAQ:MMYT) has witnessed bearish sentiment from hedge fund managers, logic holds that there is a sect of hedgies that decided to sell off their positions entirely last quarter. Intriguingly, J Kevin Kenny Jr’s Emerging Sovereign Group said goodbye to the largest stake of the 700 funds followed by Insider Monkey, valued at an estimated $19.8 million in call options. Frank Slattery’s fund, Symmetry Peak Management, also cut its call options, about $2.6 million worth. These transactions are interesting, as aggregate hedge fund interest fell by 2 funds last quarter.

As you can see these stocks had an average of 15.5 hedge funds with bullish positions and the average amount invested in these stocks was $317 million. That figure was $58 million in MMYT’s case. Aerie Pharmaceuticals Inc (NASDAQ:AERI) is the most popular stock in this table. On the other hand Exponent, Inc. (NASDAQ:EXPO) is the least popular one with only 12 bullish hedge fund positions. Compared to these stocks MakeMyTrip Limited (NASDAQ:MMYT) is even less popular than EXPO. Considering that hedge funds aren’t fond of this stock in relation to other companies analyzed in this article, it may be a good idea to analyze it in detail and understand why the smart money isn’t behind this stock. This isn’t necessarily bad news. Although it is possible that hedge funds may think the stock is overpriced and view the stock as a short candidate, they may not be very familiar with the bullish thesis. In either case more research is warranted.