Most investors tend to think that hedge funds and other asset managers are worthless, as they cannot beat even simple index fund portfolios. In fact, most people expect hedge funds to compete with and outperform the bull market that we have witnessed in recent years. However, hedge funds are generally partially hedged and aim at delivering attractive risk-adjusted returns rather than following the ups and downs of equity markets hoping that they will outperform the broader market. Our research shows that certain hedge funds do have great stock picking skills (and we can identify these hedge funds in advance pretty accurately), so let’s take a glance at the smart money sentiment towards Kite Realty Group Trust (NYSE:KRG).

Kite Realty Group Trust (NYSE:KRG) shares haven’t seen a lot of action during the second quarter. Overall, hedge fund sentiment was unchanged. The stock was in 6 hedge funds’ portfolios at the end of the second quarter of 2019. At the end of this article we will also compare KRG to other stocks including Frank’s International NV (NYSE:FI), Esperion Therapeutics, Inc. (NASDAQ:ESPR), and Getty Realty Corp. (NYSE:GTY) to get a better sense of its popularity. Our calculations also showed that KRG isn’t among the 30 most popular stocks among hedge funds (see the video below).

In the 21st century investor’s toolkit there are many formulas stock traders use to value stocks. A couple of the most useful formulas are hedge fund and insider trading activity. We have shown that, historically, those who follow the best picks of the best money managers can outperform their index-focused peers by a superb margin (see the details here).

What have hedge funds been doing with Kite Realty Group Trust (NYSE:KRG)?

At the end of the second quarter, a total of 6 of the hedge funds tracked by Insider Monkey held long positions in this stock, a change of 0% from one quarter earlier. On the other hand, there were a total of 12 hedge funds with a bullish position in KRG a year ago. With hedge funds’ capital changing hands, there exists a select group of notable hedge fund managers who were upping their stakes significantly (or already accumulated large positions). 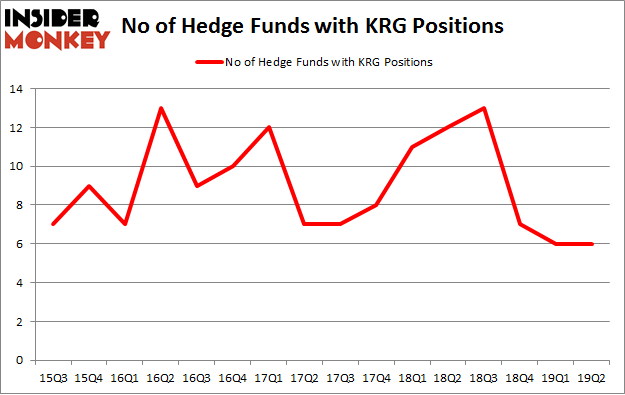 According to Insider Monkey’s hedge fund database, Renaissance Technologies has the largest position in Kite Realty Group Trust (NYSE:KRG), worth close to $37.5 million, comprising less than 0.1%% of its total 13F portfolio. The second largest stake is held by Balyasny Asset Management, managed by Dmitry Balyasny, which holds a $7.2 million position; the fund has less than 0.1%% of its 13F portfolio invested in the stock. Remaining members of the smart money that are bullish consist of Cliff Asness’s AQR Capital Management, Ken Griffin’s Citadel Investment Group and John Overdeck and David Siegel’s Two Sigma Advisors.

As you can see these stocks had an average of 16.5 hedge funds with bullish positions and the average amount invested in these stocks was $182 million. That figure was $54 million in KRG’s case. ArQule, Inc. (NASDAQ:ARQL) is the most popular stock in this table. On the other hand Getty Realty Corp. (NYSE:GTY) is the least popular one with only 10 bullish hedge fund positions. Compared to these stocks Kite Realty Group Trust (NYSE:KRG) is even less popular than GTY. Hedge funds clearly dropped the ball on KRG as the stock delivered strong returns, though hedge funds’ consensus picks still generated respectable returns. Our calculations showed that top 20 most popular stocks among hedge funds returned 24.4% in 2019 through September 30th and outperformed the S&P 500 ETF (SPY) by 4 percentage points. A small number of hedge funds were also right about betting on KRG as the stock returned 8.9% during the third quarter and outperformed the market by an even larger margin.