Here is What Hedge Funds Think About John B. Sanfilippo & Son, Inc. (JBSS)

A market correction in the fourth quarter, spurred by a number of global macroeconomic concerns and rising interest rates ended up having a negative impact on the markets and many hedge funds as a result. The stocks of smaller companies were especially hard hit during this time as investors fled to investments seen as being safer. This is evident in the fact that the Russell 2000 ETF underperformed the S&P 500 ETF by nearly 7 percentage points during the fourth quarter. We also received indications that hedge funds were trimming their positions amid the market volatility and uncertainty, and given their greater inclination towards smaller cap stocks than other investors, it follows that a stronger sell-off occurred in those stocks. Let’s study the hedge fund sentiment to see how those concerns affected their ownership of John B. Sanfilippo & Son, Inc. (NASDAQ:JBSS) during the quarter.

John B. Sanfilippo & Son, Inc. (NASDAQ:JBSS) has seen an increase in enthusiasm from smart money lately. JBSS was in 10 hedge funds’ portfolios at the end of December. There were 8 hedge funds in our database with JBSS holdings at the end of the previous quarter. Our calculations also showed that JBSS isn’t among the 30 most popular stocks among hedge funds.

What have hedge funds been doing with John B. Sanfilippo & Son, Inc. (NASDAQ:JBSS)?

At Q4’s end, a total of 10 of the hedge funds tracked by Insider Monkey were bullish on this stock, a change of 25% from the second quarter of 2018. The graph below displays the number of hedge funds with bullish position in JBSS over the last 14 quarters. With the smart money’s positions undergoing their usual ebb and flow, there exists a few notable hedge fund managers who were adding to their stakes significantly (or already accumulated large positions). 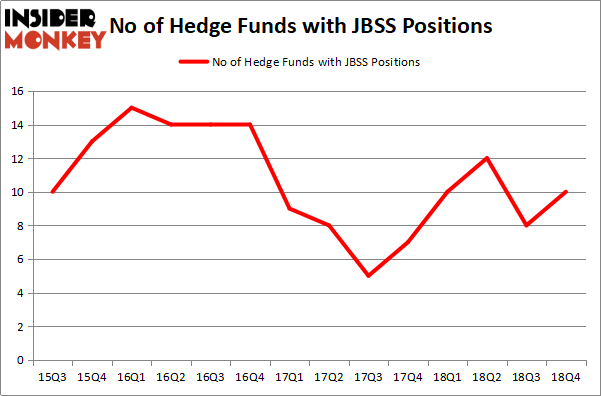 More specifically, Royce & Associates was the largest shareholder of John B. Sanfilippo & Son, Inc. (NASDAQ:JBSS), with a stake worth $72.5 million reported as of the end of December. Trailing Royce & Associates was Broad Bay Capital, which amassed a stake valued at $8.3 million. AQR Capital Management, Citadel Investment Group, and Renaissance Technologies were also very fond of the stock, giving the stock large weights in their portfolios.

Consequently, specific money managers were leading the bulls’ herd. Broad Bay Capital, managed by Richard Scott Greeder, assembled the most valuable position in John B. Sanfilippo & Son, Inc. (NASDAQ:JBSS). Broad Bay Capital had $8.3 million invested in the company at the end of the quarter. Mike Vranos’s Ellington also made a $0.3 million investment in the stock during the quarter.

As you can see these stocks had an average of 7.5 hedge funds with bullish positions and the average amount invested in these stocks was $25 million. That figure was $93 million in JBSS’s case. MAG Silver Corporation (NYSE:MAG) is the most popular stock in this table. On the other hand ChipMOS Technologies (Bermuda) Ltd (NASDAQ:IMOS) is the least popular one with only 1 bullish hedge fund positions. John B. Sanfilippo & Son, Inc. (NASDAQ:JBSS) is not the most popular stock in this group but hedge fund interest is still above average. Our calculations showed that top 15 most popular stocks) among hedge funds returned 24.2% through April 22nd and outperformed the S&P 500 ETF (SPY) by more than 7 percentage points. Hedge funds were also right about betting on JBSS as the stock returned 25.5% and outperformed the market by an even larger margin. Hedge funds were rewarded for their relative bullishness.

5 Stocks in the Spotlight Due to The Continued China Trade War
Monthly Newsletter Strategy
Download a free copy of our newsletter and see the details inside!
Hedge Fund Resource Center
Related News
John B. Sanfilippo & Son, Inc. (JBSS): What Hedge Funds Think about This Stock? Insiders Selling Shares of 3 Strong Performing Stocks Amid Market Turbulence Omega Protein Corporation (OME): Hedge Funds Are Bearish and Insiders Are Bullish, What Should You Do? 25 Cities with the Most Unfaithful Wives 6 Easiest Programming Languages for Middle School Students 18 Cute Tinder Bio Examples (Female)
Billionaire Hedge Funds